Agriculture  has been  described  the  centre  piece of  socio-economic growth and development  of  any nation.

Governor Muhammed Umar Jibrilla who stated this at the commissioning and Distribution of One Hundred and  Five  (105) number of  Tractors to the  Twenty One (21)  Local Government  Councils of Adamawa state held at Mahmud Ribadu Square Yola .

The Governor  reiterated the commitment of his government  to revamp the  Agricultural Sector  as directed by President Muhammadu Buhari on his Agricultural  Policy  of providing  food security  to the citizenry .

Governor Muhammed Jibrilla  charged  the Council  Chairmen to ensure that the  Tractors  and other farming impliments are being  maintained  for the betterment of the people of Adamawa state .

He also said that his government will continue to give Agricultural sector  all the necessary  attention as the  procurement of One Hundred and Five number of Tractors was the first  phase of government  intervention to the  sector , explaining that the  purchasing  of the Tractors was necessitated by the  good  intentions of both the state and Local Government  Councils in the state ,stressing that  Five  Tractors  would be  allocated to each Local government Council  across the state  and urged the  benefiting  Communities  to make good use of the  Tractors  judiciously and to ensure the spirit of maintenance  culture so as to keep the  machines  functional.

In his speech at the occasion , the Honourable Commissioner ministry for Local government and chieftancy Affairs Alhaji Mustapha  Barkindo explained that the  idea of the  procurement of  the Tractors was a  brainchild of the Federal government  policy thrust  on boosting Agriculture  in the  country  as wellas to  reduce over dependance on Oil .

He  stressed that  it is  in realization  of the objectives of Governor Muhammed Umar Jibrilla's wisdom  to purchase One Hundred and Five Tractors  to the Twenty-One Local government Councils  for use by the  rural  communities in order to engage in  large  scale  farming  at the cost of #12,491,188,12.per Tractor.

The Commissioner also explained that the present government  has been  committed  on its policy trust  of Transparency , Good  governance as well as  ensuring  efficiency and integrity  based on the  need to promote  and boost  Agricultural  production in Adamawa state .

Also in his remarks the Honourable Commissioner Ministry of Agriculture Dr Waziri Haruna Ahmadu  said that the  present government  under Governor Muhammed Umar Jibrilla has  made Agricultural  Sector as  one of its  priority  because majority of the  people of  the state  are farmers , stressing that  this is  just the  beginning of  government's  gesture  to provide  farmers of the state with all the necessary  farming impliments  in  order to boost Agriculture in the state .

In  their good will messages , the  Chief of Staff  Government hours Alhaji AbdurRahman Abba Jimeta  and His  Royal Highness Lamido Adamawa Dr  Muhammadu Barkindo Aliyu Mustafa urged  farmers of Adamawa state to  make sure that  they use the Tractors and other farming impliments  for the purpose intended  and appealed to the people of  the state  to continue to support the present administration under  Senator Muhammed Umar Jibrilla in order to provide more Democracy dividends .

In his  vote of thanks  on  behalf of the  Council Chairmen , the  ALGON  Chairman  Barrister Aliyu Wakili Boya assured that the  council  Chairmen  would ensure the  good use and maintenance of the Tractors for three purpose  intended , pointing out that they are  proud of the present administration  in piloting the affairs of the state by granting  the Local  Councils  a free hand  to operate . 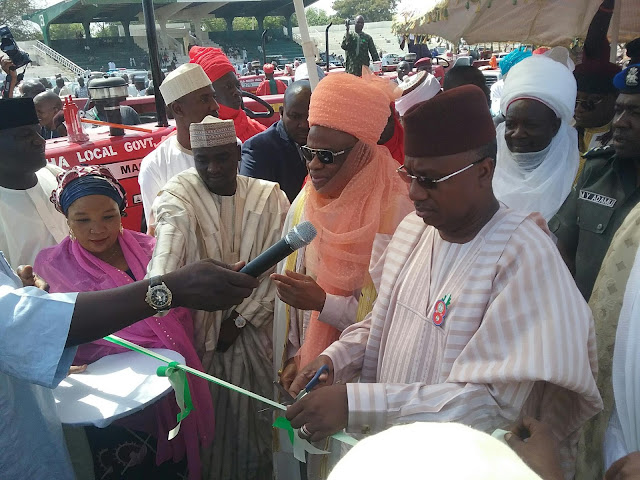