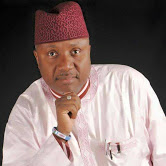 Adamawa State Governor, Senator Muhammadu Umar Jibrilla Bindow has been honoured with the prestigious Africa Leadership Award of Intergrity by the International Magazine at the University of Ghana, Accra, Saturday. According to the organisers, they identified Bindow for this recognition based on his giant strides in  infrastructural and physical development in Adamawa state, and that the organisation had earlier gone on a joint survey and appraisal in Nigeria before arriving at their decision of finding the Governor worthy of the award.

In his acceptance speech, Governor Bindow, who was represented by his Chief Press Secretary, Mathias Yohanna, thanked the organisers and stated that the award will spur him to do more for Adamawa state and it's good people.

On his part, an indigene of Adamawa, resident in Accra, John Alheri said,"we are eternally grateful for the uncommon transformation in our State and the developmental strides of our dear Governor. I wish we can change the constitution to allow Bindow continue as Governor forever".

The event was attended by distinguished dignitaries from all walks of life across the continent.
09:02
Adamawa Daily Reports
News
Email ThisBlogThis!Share to TwitterShare to Facebook