Home » News » NEWS:Traditional and Religious Leaders are Call upon to Engage women in promoting peace and security in Adamawa state...

NEWS:Traditional and Religious Leaders are Call upon to Engage women in promoting peace and security in Adamawa state... 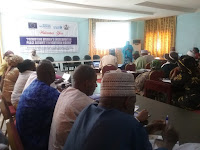 The call was made during the 2016 UN Women validation meeting on peace and security assessment report held at Homtel Hotel, Yola Adamawa state.

In his  welcome address, the  Hon. Commissioner, Ministry for Women Affairs and Social Development, Alhaji Aliyu Bell Tola, commends UN Women for promoting the  plight of women in the state and the  country at large and   wish the forum  a successful meeting.

In his research paper presentation entitled “The need to engage women in promoting peace and security”, the resource person Mr. Hussaini   Abdu said  promoting women  engagement in peace and security in the state is encouraging,  because women are good decision makers and they are most vulnerable whenever conflict occur in a society. 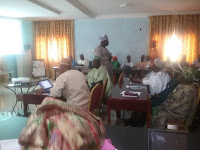 According to him the research  on the  subject matter found  out  that  women are  considered active in community peace process, Traditional /Religious  leaders are  major  drives of peace  process  in the society, the state has conflict research  institutions and they are largely effective and  conflicts can only be  resolved through mediation not  through  military action.

Furthermore,  in the course of the meeting, it has been  confirmed that women are given traditional titles  in Ganye and Numan local  governments of Adamawa state, and it is considered a step forward in engaging women in leadership.


In her closing remarks, the permanent secretary, ministry for women Affairs,  Haj.  Maisaratu Bello call on the stakeholders to support women in promoting peace in the state.

In an interview with district head of pakka, Alh. Adamu Abubakar  said he feels honored to be among the  participants of the meeting, he promised to carry women along in his domain.

Those who attended the meeting  are Hon. Commissioner Ministry of Information and Strategy,  Traditional rulers, Religious leaders,Resource person,  Development partners, and journalists.