Home » News » News: Adamawa State Government  is to closed  down  all the Internally Displaced Persons  Camps across the State

News: Adamawa State Government  is to closed  down  all the Internally Displaced Persons  Camps across the State 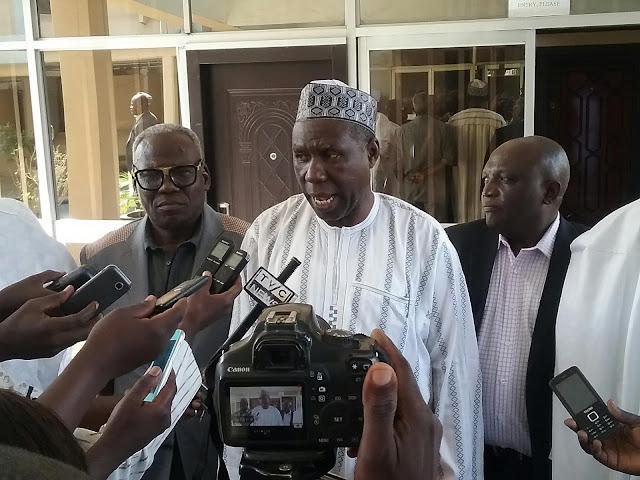 4th January, 2017.
By Yunusa Abdullahi.
This was diaclosed by the Honourable Commissioner Ministry of Information and Strategy Comrade Ahmad Ibrahim Sajoh along side Honourable Commissioner of Finance Mahmud Sali Yunusa, Commissioner of Agriculture Dr Waziri Haruna Ahmadu, Commissioner of Higher  Education  Alhaji Ahmed  Rufai  and the  Executive Chairman State Planning Commission Engr. Arin Lutu  while briefing Journalists at the end of the First  State Executive Council Meeting  (EXCO )for the year 2017 presided over by the Deputy Governor Engr.Martins Babale. This time around it was  held at the Council Chambers of the Government House Yola.

The Information Commissioner explained that government would  close  all the IDPs camps across the state so that the displaced persons can have a  sense of  belonging and to live like any other person  in the society.
He also  stressed that all the  stakeholders concerned with the  issue of IDPs  would be involve, adding that  a committee  to be chair  by him  for successful process of the closure of the  Camps. 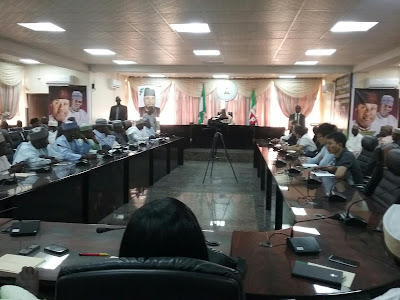 The Sajoh explained that the Council also discussed on the issue with regards to  Adamawa State University, Mubi, pointing out that a committee would be  inaugurated  so as to reform the  institution to towards attainment of excellence, adding that the essence of the  panel  is to ensure that all the internal crisis  surrounding the  University be  resolved  amicably.

He further explained that the  Visitor has  all the  powers to deal with  all issues  to reposition the  University in his own wisdom, stressing that the  commitment of the  Visitor is the key thing for the Institution at present.
According to Sajoh,  the Council also deliberated extensively on the 2017 Budget ;" This is the first time that the  government is  planning  such a Budget of  its kind to be  presented to the  State House of Assembly for consideration and  it refereed to as Budget sailing, adding that MDA'S  will be giving such sailing in order to prioritise  government  activities.
The Council also discussed on the issue of  the just flag - Off Anchor Borrowers Scheme in respect of  farmers in the Adamawa State.
12:33
Adamawa Daily Reports
News
Email ThisBlogThis!Share to TwitterShare to Facebook