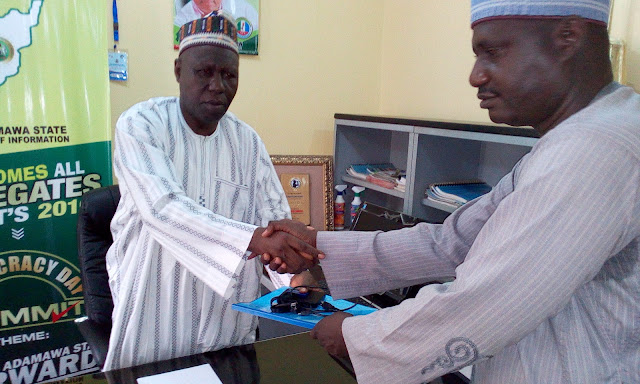 The Committee that was saddled with the responsibility of Project monitoring and documentation of the developmental projects being executed by the present administration under Governor Muhammed Umar Jibrilla  in the last Twenty -One Months while  piloting the affairs of Adamawa state has  submitted a report to the Hon.  Commissioner of Information and Strategy,  Comrade Ahmad Sajoh today at his office.

According to Sajoh,  the task of the  committee which is to produce a  written Documentary as well as to  compiled Videos and Photo Albums /Exhibition so as to show case the developmental giant strides of Governor Muhammed Jibrilla during his shortest period as Governor of Adamawa state is the first out of the task that awaits them.

The Commissioner also  appreciated the efforts of the committee for the job well done and has promised to go through it before the final publication.

However, the  Chairman of the committee Mallam Ibrahim Buba who is also the  Deputy Permanent secretary of the  Ministry presented the report to the Commissioner on behalf of the committee members.