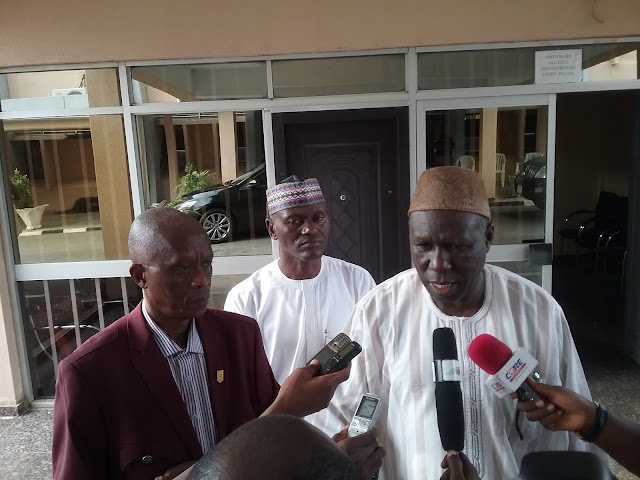 This was  part of the   resolutions reached during the  28th Weekly   State Executive Council Meeting presided over by Governor Muhammed Umar Jibrilla held at the council chambers of the Government House Yola.

The  Honourable Commissioner Ministry of Information and Strategy Comrade Ahmad Ibrahim Sajoh along side Commissioner of  Land and Survey Hon.Yayaji Mijinyawa  and the Head of State  Civil Service Dr Louis Solomon Mandama  who briefed Journalists at the end of the EXCO Meeting said the council  deemed  it necessary  and important for the  Civil servants  to  acquire houses  or to afford  finance  in order to renovate their own  houses.

According to  Comrade Ahmad Sajoh  , the  Council  also have a  useful  and fruitful   delibrations  on matters that affects the  people of the state, explaining that  the  EXCO  has  received a report of  the  committee  on Tripartite  agreement between  Nigeria ,Republic of  Cameroon  and UNHCR  on the Repatriation  of Nigerias  from  Cameroon.

The  council also discussed on the issue of Land  allocation  in order to provide  houses to the  Internally Displaced persons  in the state  which  will be  constructed by PCNI, UNHCR   and ANDP with specific  emphasis to the local government  affected by the insurgency.

The Honourable Commissioner also explained that  some International Donor agencies  willing to  to build houses  for IDPS and the Ministry of  Land and Survey  has already earmarked about Three  Hundred  Hecters of Land for that purpose  to the Internally Displaced persons  across  Adamawa state.

Sajoh also explained that the EXCO discussed on the issue of  security  Situations  as well as  to improve  awareness  on the protection of Lives and properties of citizens of Adamawa state.

The  Council also  deliberated  on the issues  related to  the Christian  Pilgrimage  for the year 2017 as well as  general process of  governance .