Home » Special Report » SPECIAL REPORT:Ministry of Water Resources Committed to Supporting the State Monitoring and Evaluation Team with all Data Required for the Development of the Sector.

SPECIAL REPORT:Ministry of Water Resources Committed to Supporting the State Monitoring and Evaluation Team with all Data Required for the Development of the Sector. 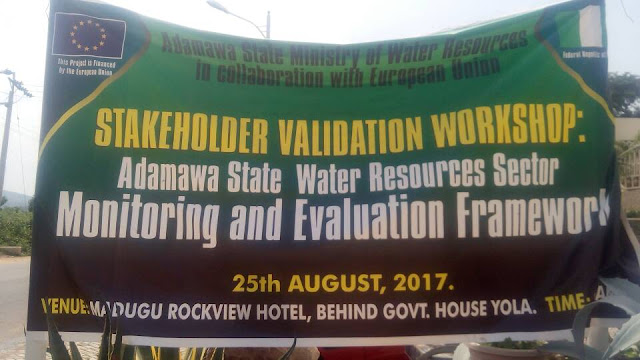 The Adamawa State Honourable Commissioner of Water Resources, Alhaji Ahmed Rufai Abubakar, has reiterated his Ministry's commitment to support the State Monitoring and Evaluation Team with all the data and information they would required for the development of the Water Resources Sector. Alhaji Abubakar stated this during his speech delivered at the validation workshop of the Adamawa State Water Resources Sector Monitoring and Evaluation Framework, held at Madugu Rockview Hotel, Yola.

The Commissioner who welcomed all the guests to the workshop said this was the final document that would be validated as part of the effort for the domestication of the National Monitoring and Evaluation Framework for the Water Resources in Nigeria. Adding that these are great achievements because tracking performance in all programmes and projects in the Water Resources Sector in the state will be enhanced the State M&E Framework. 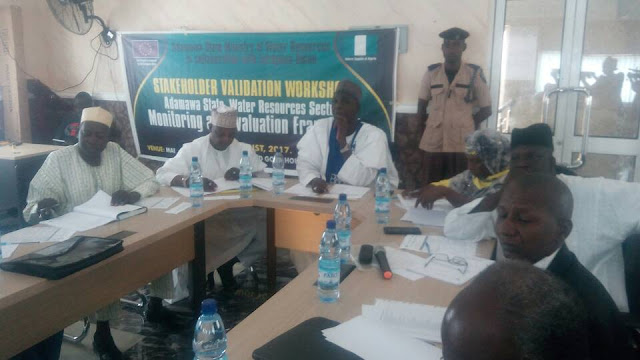 While emphasizing on his ministry's readiness in support of the team, Alhaji Abubakar highlighted some few important interventions made by his Ministry to be included, community mobilization to establish Water Consumers Associations which will facilitate effective management of water facilities in some selected small towns, recalling that the State Government has already paid its contribution of N395, 000, 000.00 to European Union as well as commencement of the development of an Implementation Framework and Plan for the Water Resources Policy 2016.

The Commissioner paid special tribute to all stakeholders and the Inter-Agency Working group for the great effort that they have put into process of developing the State M&E Water Resources Sector Framework in the state. As well thanked the European Union for its continued support to reform the process in the Water Sector and affirmed them that the State government is committed in ensuring that the people of Adamawa State gain access to potable water and improved sanitation services.

While reading the objectives of the workshop, a Key Expert, WSSSRP III (Hula and Co Human Dynamic KG), Adamawa State Ministry of Water Resources, Mr. Andy Mondoka, stated that the M&E is intended to lay the foundation of changing the face of planning and budgeting, particularly for the water supply and sanitation sector to improve its efficiency and effectiveness.

He highlighted some objectives as to create evidence for informed decision making stakeholders mainly at policy level as well provide information for accountability and performance improvement, develop mechanism that allows for an understanding and monitoring of the progress made by the stakeholders in the implementation of specific actions of the Sustainable Development Goals (SDGs).

Others included, to help in building state’s own M&E system that can be used to measure progress, to provide policy makers with ability to evaluate long-term changes produced by the strategy on relevant issues, such as innovation and access to water supply and sanitation, gender balance and disability issues.

In his closing remarks, the Adamawa State Chairman Planning Commission, Engr. Arin Lutu, said he was impressed with the presentation of the final draft of the water resources sector. Engr. Lutu, who was represented by the Permanent Secretary of the Commission, Mr. Geoffrey Garba, who though, decried lack of implementation of plan as the major impediments of the M&E charged the team to work hard for the actualization of the mandate reposed on them.