Home » News » NEWS : Transparency and Accountability is the cardinals principles of my Administration Says Governor Bindow.

NEWS : Transparency and Accountability is the cardinals principles of my Administration Says Governor Bindow. 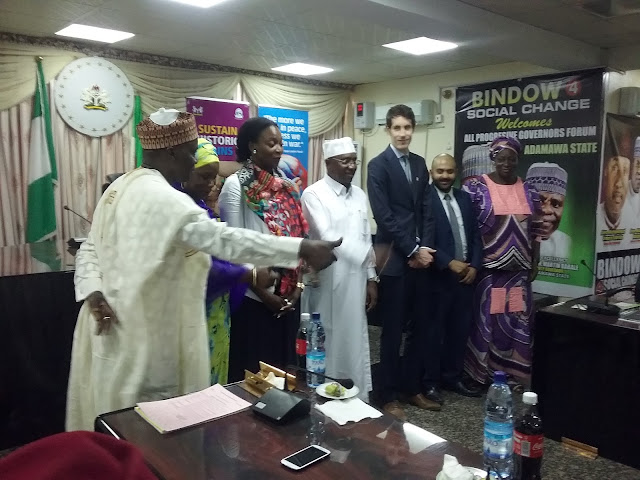 Governor Muhammed Umar Jibrilla  is to make a presentation  at the  Chatham house  on Transparency and Accountability  in Governance.

This  was  made known by a delegation  from  the Chatham house,  The Royal Institute of  International  Affairs  United Kingdom  led by the project  Officer, Africa Programme,   Mr Daragh  Neville  while  presenting a  letter of invitation to the Governor  at Government House Yola recently.

Governor Muhammed Umar Jibrilla said  Transparency and Accountability is the cardinals principles of his administration, explained that Adamawa state is  willing to  show case  it's integrity  in the fight against corruption, Mismanagement and waste of public funds.

The Governor  pointed out that  even though Adamawa state  is One of the front  line States that  had suffered the  effects of insurgency by  Boko Haram, giants  steps are being taken  to ensure that rapid transformation  is indication of  selfless  service  to the people.

The Governor had  also assured the  delegation  from the Chatham House  that Adamawa state is peaceful, Calm and stable  while  government has embarked on the  oriented  programmes to enhance  development.

Earlier the leader of the delegation  Mr  Garagh  Neville  said Chatham house  was established in 1920 as a Royal  Institute for  International  Affairs, noted that the  Chatham house  has embarked on  Research on  social  beliefs and  expectations  in misuse  of public funds  and found out that morality  and perception  plays a vital role in the  area of corruption  by public  office  holders  in Nigeria.

According to  Mr. Garagh  Neville,  social  norms  in demanding  for bribe and gratification among public  servants  is motivated by the  community and other  related issues.

He however  gave  Governor Muhammed Jibrilla and the Adamawa state Government  a pass mark which he described as the  basis for and rare opportunity for the Governor to  present a paper at the  Chatham House.

Also in his  presentation,  the Secretary to the  State Government,   Dr Umar Buba Bindir highlighted some of the remarkable achievements recorded by the present administration under Governor Muhammed Umar Jibrilla for the past Two Years while piloting the affairs of Adamawa state which includes  provision of Roads infrastructure, Declaration of State of emergency on Education and Health sectors, provision of portable Drinking water to the electorates, provision of Agricultural impliments as well as maintaining peace and security  among others.