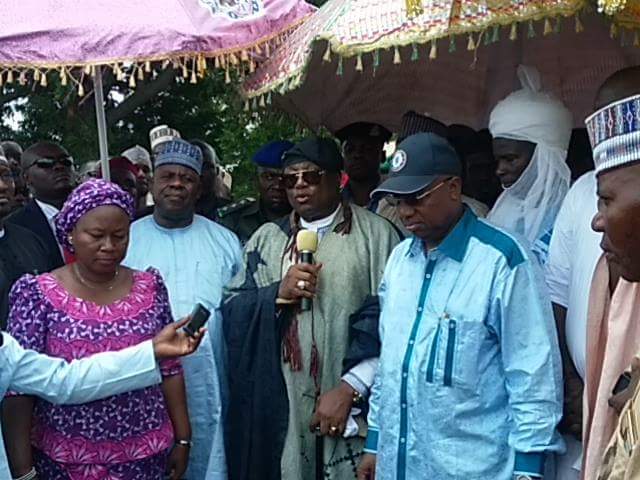 His Execellency the Executive Governor of Adamawa State Senator Mohammed Umaru Jibrilla flagged  off the first  phase  of School Rehabilitation, Constructions and Solar power provision  as well as Economic Trees planting Campaign  in GSS Villanova Numan  and Hong Respectively. Under the declared State of Emergency in the Education Sector.

The Commissioner of  Information and Strategy Comrade Amad Ibrahim Sajoh , said the Solar systems are to provide dual function of both Security and Lightning to make Studies easier  for the Students.

On her part the Commissioner of Education,  Professor Kaletapwa George Farauta reiterated  the Government’s  commitment to construct more than One Hundred blocks of class rooms as well as renovate the old ones across the entire State.

Traditional Dances and Villanova anthem by His Royal Highness Homon Onest Irmiya Stephen, Hamman Batta and  Amna Shelleng  with Some members of his kingdom men and women including Chief of Staff Alhaji Abduraman Abba Jimeta accompanied by the Secretary to the State Government Dr. Umar Buba Bindir  added color to the occasion, as Thousands of people welcomed the Governor and his entourage. In both Local Governments, 4+4 Come 2019.