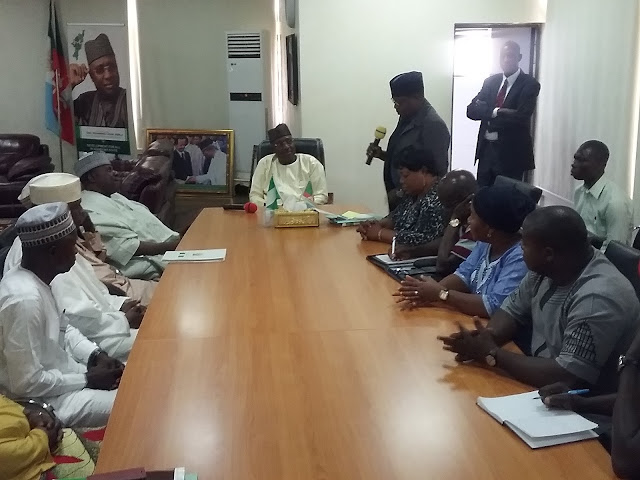 A Delegation from the Ecological fund was in Adamawa state to  assess Environmental challenges  being faced by the people of Adamawa state as a result of degradation.

Mr  Doyin Muslim  who led other members of the  delegation who paid a courtesy call on Governor Muhammed Umar Jibrilla  at Government House Yola recently, explained that the  team were on a nation wide assignment.

According to  him the delegation would tour all the  Twenty-One Local Government Areas of Adamawa state and to ascertain the level of degradation  done due to Ecological disaster.

He also  noted that the  Six Man delegation would  visit Taraba State  on 5th same mission and appealed for the support and  cooperation of the State Government  in the area of security in order to enable members of the Team discharged their assignment while in the state.

While responding Governor Muhammed Umar Jibrilla said Adamawa state is  safe and stable at present, explaining that would see for itself the Environmental challenges  facing Adamawa state.

Governor Muhammed Jibrilla however  directed the office of the Honourable Commissioner Ministry of Environment to provide all the necessary support to  enable members of the team to carry out their assignment without any hitches in the state.