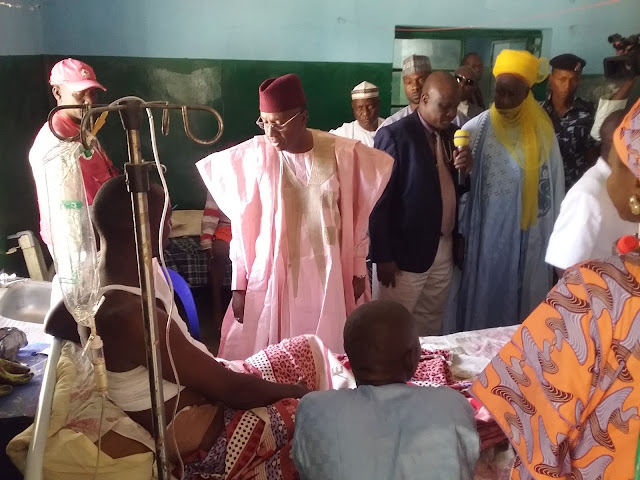 Governor Muhammed Umar Jibrilla has  condoled and sympathised with the people of  Mubi  over the recent  Bomb blast in the  area .

During a visit to  General Hospital Mubi to sympathised with the victims of the  Blast, the Governor said  government will  take the responsibility of their medical bills,assuring that his administration  is committed to  ensure that lives and properties of Adamawa citizens are fully protected.

He also  called on the people to be vigilant and security conscious as well as to  report any suspicious person or object to the security agents in order to  avert future occurance in the area.

While conducting the Governor round the Hospital,  the principal medical  officer of the  Hospital Dr  Sakawa informed the Governor that over fifty victims were received  out of which  Eight  died, Fifteen were reffered to the Federal Medical Center Yola while others sustained minor injuries.

Governor Muhammed Jibrilla was  also  at the Palace of the  Emir of Mubi Alhaji Abubakar Isa Ahmadu to register  his condolence and sympathised with the families  who lost their lives over the blast  and pray God to  grant their souls Eternal rest and the families fortitude to bear the irreparable loss.

While responding,His Royal Highness the Emir of Mubi  thanked the Governor for the sympathy and concern shown to the  people of his domain and assured that  his subjects will continue to support the present government at all times for the overall development of the area and Adamawa state.