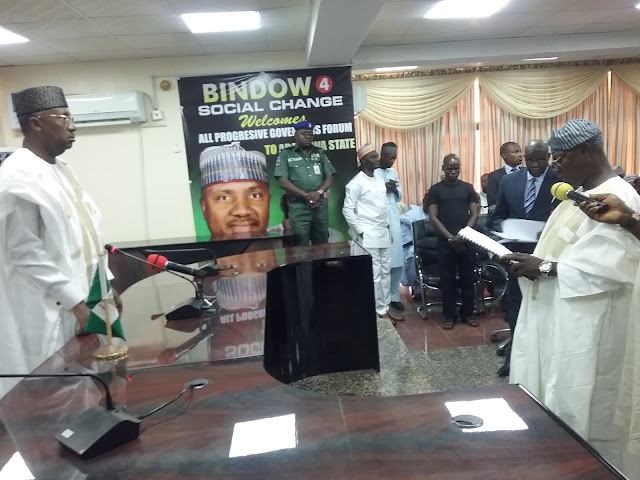 Public Servants in Adamawa state  had been  charged  to discharge their  Official responsibilities with  honour and dignity.

Governor Muhammed Umar Jibrilla made the  charge  while  presiding over the swearing in Ceremony of Chief Ezekiliel Gamanzangon as permanent secretary into  the state Civil service.

While congratulating  Chief  Ezekiliel Gamanzangon  over his new appointment, the Governor  reminded  him to abide by the oath of office taken as well as account  his stay wardship  before God ,pointing out that  public office is a public trust.

He reiterated that  Prudence, Transparency and Accountability is the cardinals principles of his administration, explained that the  appointment of Chief Ezekiliel was done based on merit and urged him to use his vast experience in  service  to contribute  his quota towards the development of Adamawa state.

In their remarks, the Secretary to the State Government, Dr Umar Buba Bindir and the  Head of Civil service, Dr Louis Solomon Mandama noted that Chief Ezekiliel Gamanzangon as a carrier Civil  Servant   is a hard working and loyal who is always adhered  to his  responsibilities deligently as well as an assets to the  present  government.

In his vote of thanks, the  newly  sworn in Permanent Secretary, Chief Ezekiliel Gamanzangon  thanked the Governor for giving  him the opportunity to serve in his Government.

He assured that  he will abide by the oath of office taken, and promised to contribute his quota to the development of Adamawa state.

The  oath of office was administered by the state Solicitor General and Permanent Secretary, Ministry for Justice, Barrister Suleiman Muhammed.