NEWS:NUJ PRESENTS AN AWARD OF EXCELLENCE TO FORMER CHRISTIAN ES IN ADAMAWA 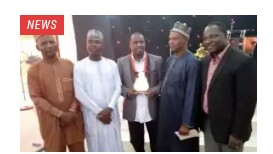 The Leadership of  Union of Journalist (NUJ) Adamawa State chapter have presented an Award of "Excellence" to a former Executive Secretary (ES) of the state's Christian welfare board, Bishop Jinga Lucios Mayo.

The presentation which took place at his office in life spring chapel international, Yola in the presence of many friends and associates of the former ES.

According to the State Secretary of the Union (NUJ), Mr Zare Baba the sterlings achievements of Dr Jinga Mayo while he was the ES of Pilgrim welfare Christians Board attracted their attention for the well deserved Award.

"We were monitoring and watching your performances while you were serving at the Christians welfare Board, your dossier has been analysised, criticised and packaged and we discovered you are the most deserved recipient of this excellence award because of your impeccable records of achievements during your time as the ES of the Board ." Zare said

He continue to say that it will always be in the history of Adamawa State that it was during the time of the former ES high number of Christians have traveled to Israel for the holy Pilgrims.

"Sir, you made some tremendous amount of positive effort to trained hundreds of Adamawa indigenes in various agriculture skills acquisitions that today they are adding value to the society, because of your good leadership qualities you initiated the construction of a Well standard Secretariat that is 60% completion and plans were on ground to bring an Israeli company in order to established an agricultural company in Fofure. All these are some of our convince reasons of bestowing this Award on you. " He added

While representing the Award, the Chairman of the NUJ, Comrade Salisu Abubakar said:

"The gesture is In recognition of your outstanding contributions in the discharged of your duties as the Executive Secretary of Christians welfare board of Adamawa State.

"Is a merited award to a great personality to encourage you to fly high in order to improve the younger generation."

In his response, the recipient, Dr Jinga Mayo appreciate the Union for encouraging, attesting that the Award has comforted him that somebody else where is watching all what he was doing.

He further said the Award is being dedicated to the State Governor who gave him the opportunity to be recognised.

"This is to promote peace and unity,
With this I'm encourage that someone somewhere else is watching me." He said