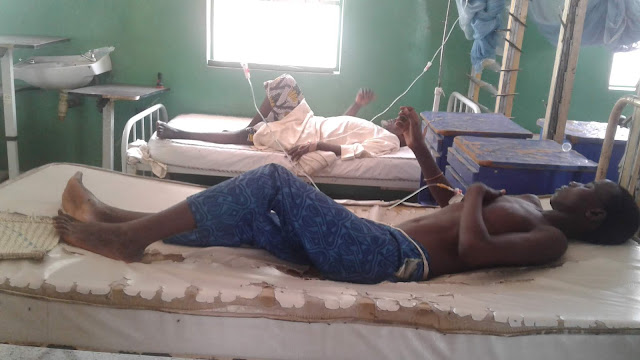 High  Powerful  State Government  Delegation led by the Honourable Commissioner Ministry of Health Dr. Fatima Atiku Abubakar  along sides Commissioner of Information and Strategy Comrade Ahmad Ibrahim Sajoh, State Attorney General and Commissioner for Justice BSD Sanga and that  of Water Resources Abubakar Ahmed Rufai were  in  Mubi Local Government Area to sympathise and to ascertained the effect of Cholera Outbreak  in the area.
The leader of the  delegation,  Dr. Fatima Atiku Abubakar said  government is  doing everything  possible to  curtailed the situation.
Dr.  Fatima   assured that  more consignment  of Drugs and consumables  would be delivered to the treatment centre in Mubi  General Hospital for the treatment of affected persons.
In his remarks, the Honourable Commissioner of Information and Strategy Comrade Ahmad Ibrahim Sajoh appreciated the efforts of the management and  staff of General  Hospital Mubi and  volunteers  for their  hard work and concern towards Selfless Service to humanity.
According to Comrade Sajoh, the delegation was at Mubi after a resolution by the Members of the  State Executive Council mandated the  line Ministries  to visit the  area and  ascertained the situation.vHe also  advised  communities to always maintain  proper hygienic environment and avoid  taking contaminated water.

Earlier, the Principal Medical Officer  of Mubi  General Hospital  Dr.  Ezra  Mika'Ilu Sakawa told the  delegation  that about Two Hundred and  Twenty  -Six cases were recorded out of  which Two Hundred and  Twenty -Three Victims  were discharged while Twelve confirmed death.
Dr. Sakawa also explained that the  Hospital are in shortage of Drugs and commended International  Donor  Agencies for their magnanimous  contribution in controlling the  endemic disease in Mubi and  it's environs.

The  Delegation were at the Palace of the Emir of Mubi His Royal Highness Alhaji Abubakar Isa Ahmadu where the Royal Father  assured the delegation  of the full support  and cooperation of the Emirate, stressing that he will mobilise the entire subjects and other stakeholders towards sensitization of general public on how to promote environmental Hygiene. EOC meeting with  various  partners  held to fashion out strategies that will address the outbreak in the area.
05:19
Adamawa Daily Reports
Health
Email ThisBlogThis!Share to TwitterShare to Facebook