The  people of Shelleng  Local Government  Area made the  commendation while  on a thank you  visit  to Governor Muhammad Umar Jibrilla  at Government House Yola.

Led by His  Royal Highness  Amna Shelleng,   Alhaji  Abdullahi  Isa Dasong state that the delegation was at  Government House to  thank the  Governor over the developmental projects  being executed by the  present  Administration under the leadership of Governor Muhammad Umar Jibrilla in the area.

The Royal Father  assured the Governor that  the people of Shelleng  will  continue to support the  Government of  Senator Jibrilla at all times  for the overall development of the area and Adamawa as a  whole.

While  appreciating the giant strides of the Governor, the Monarch  also  called on the Government  to assist  the community by renovating General Hospital Shelleng which is the  only  Health  institution in the area.

While  responding, Governor Muhammad Umar Jibrilla assured the  delegation  that his administration  will continue to provide  the people of the area with other social  amenities as promised during electioneering campaigns.

He also explained that  his government will do everything possible in ensuring that  the problem of the Hospital have been addressed, pointing out that already his government  has declared a state of emergency on Health sector and  called on the people of  Shelleng Local Government  to continue to support the  Government in order to  provide more dividends of Democracy to them.

The Governor however  appealed to the  community  to continue to live in peace and harmony with one another for the overall development of the area and Adamawa state in general. 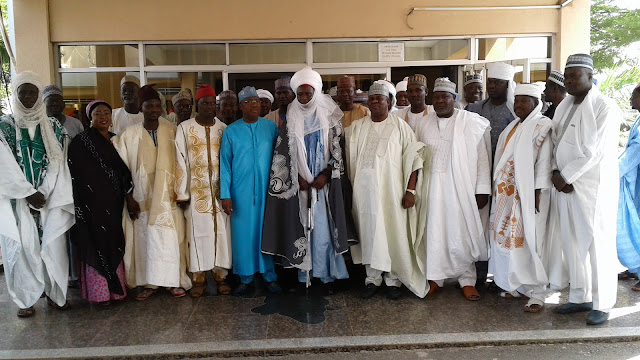