Public Office holders have been reminded to always abide by the Oath of Office taken.
Governor Muhammad Umar Jibrilla gave the charge while presiding over the swearing ceremony of Alhaji Tukur Mua'zu as  permanent secretary of the state civil service.

The Governor said, the cardinal principles of his administration is based on Transparency and Accountability and charged the newly sworn in Permanent Secretary that he will be  accountable of his stewardship while  in office .

Responding, Alhaji  Tukur Mua'zu thanked  Governor Muhammad Umar Jibrilla  for finding him worthy to serve as Permanent Secretary  in his administration. He also  promised to discharge his duties with the best of his ability in the  development of Adamawa State.

Meanwhile, Members of the State Executive Council has  observed  a special  prayers to commiserate with those who  lost their lives in the  recent  Twin Bomb blast  that occurred  at  Kasuwan Gwanjo in Mubi Town. 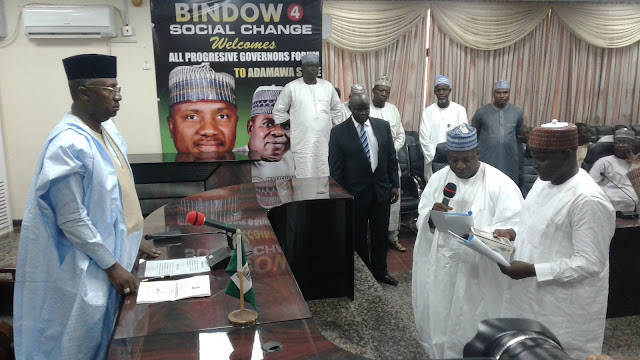