The Adamawa State Female Football Club, Adamawa Queens has pushed down Pelican Stars of Calabar from the league ladder with a lone goal in the ongoing Nigeria Women Football League (NWFL) at the Fufore Stadium.

Adamawa Queens didn’t find it easy against Pelican Stars who held them to a 2-2 draw in second leg of the NWFL Group B 2016/2017 season at the Fufore Stadium.
Five minutes into the first half, Pelican Stars' defender, Awotubo Adeshola foul Adamawa Queens' midfielder, Julianna Solomon at about 25 metres from the goal line.   Okechukwu Alekiri took a shot from a spot kick but the ball went off target.The match was crucial to Pelican Stars who are yet to win a match in the ongoing NWFL.

Proceeding intensified as time ticked away and both teams could not shake the back of the net. Therefore, tension rose and bad tackles became inevitable until the Centre Referee (CR) calmed the match in the 7 minute with a yellow card caution on Adegboye O. of Pelican Stars for a rough tackle on Kanu Gift of Adamawa Queens.

A shot on target at the 17 minute by Adamawa Queens' right back, Aka Jime Sandra ricocheted off goal post, leaving the goalkeeper of Pelican Stars, Anams Lilian, flat in the field after she failed to catch the ball and Adamawa Queens attacker, Wachukwu Oluchi ran for a rebound and put the ball into the opponents' net with a header. Giving Adamawa Queens 1-0 Pelican Stars.

In the 23 minute, Amina Waheed of Pelican Stars sustained injury and was replaced .
The visitors had opportunity to equalize in the 28 minute when its attacking midfielder, Regina Otu got a through pass from the midfield and shot the ball on target, but the prolific goalie of Adamawa Queens, Obidimma Nkiruka cleared the ball with fist.

Pelican Stars kick started the second half but the host resumed with their morale high. In the 53 minute, Adamawa Queens' prolific attacker, Omede Regina who excelled in the match, utilized a through passed to her from the midfield, dribbled 2 Pelican Stars' defenders, without hesitation shot the ball on target but the  goalkeeper denied her a goal.

As pressure mounted on Pelican Stars, in the 20 minute, its full left back clashed with Adamawa Queens' player, sustaining injury but was quickly replaced with another defender, Hoda Williams.

In the 74 minute, Adamawa Queens' Captain, Nina Gilbert who blocked chances of Pelican Stars to score a goal at the defence line, was cautioned with a yellow card by the C. A. after she held the jersey of the opponent.

In order to strengthen its attacking line to level the score line, in the 77 minute, the tactician of Pelican Stars, Sanusi Murtala made a technical substitution. He introduced an attacking midfielder, Nse Willie for a tired attacking midfielder, Regina Otu.
Adamawa Queens tactician, Baba Buba who wanted his team to score more goals, at the 78 minute made a double change in the midfield. Coach Baba introduced, Nwadike Stella for Julianna Solomon and Marvelous Duru for injured Kanu Gift. In the 85 minute, Coach Baba substituted injured full left back, Tseke Francisca with Orjii Kelechi.
At 90+2, the C.A. blew whistle to officially end the game and  the final score was Adamawa Queens 1-0 Pelican Stars.

Responding to questions with Destiny Sports in post-match press briefing, the Head Coach of Pelican Stars, Sanusi Murtala said that Adamawa Queens FC deserved to win the game because they played past Pelican Stars. However, he  associated the defeat on Pelican Stars to fatigue which he said they travelled by road for about 18 hours and arrived Yola late. The Calabar based club Head Coach commended the match officials and noted that there is great improvement in officiating this season.

On his part, the T. A. of Adamawa Queens, Coach Baba Buba praised his players saying that they have played to instructions albeit, they had missed some chances on goal which could have earn them more goals. Coach Buba said that major mistakes they made in the match will be corrected in their training.

Coach Buba lauded the match officials for fair officiating,  With regard to their late arrival in away matches resulted to fatigue on players especially last season, Coach Buba said that the management of the team are making necessary arrangement to avert last season's late arrival at the venue of match and thanked the Governor of Adamawa State, Sen. Muhammadu Umaru Jibrilla and the entire management of Adamawa Queens for the necessary support they are rendering to the club. 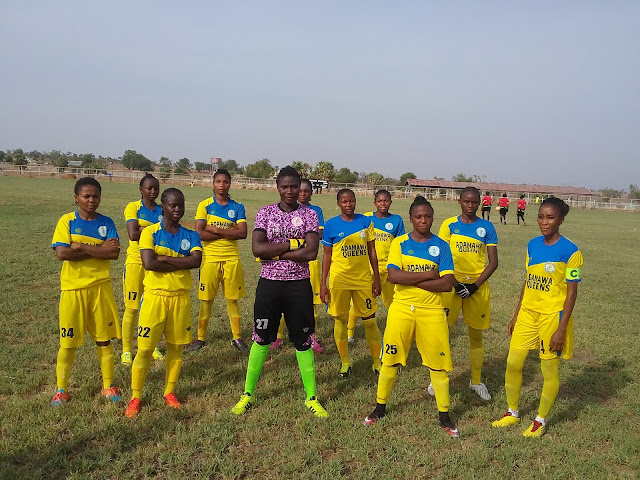