Adamawa United Football Club has beatenJigawa Golden Stars 1-0 to earn 3 points in their opening match of the Nigeria National League (NNL) Group A1 2017/2018 season played at the Fufore Stadium.

The host team, which was under intense pressure to secure a win, had in the first 10 minute of the game, battled harder to break the domination of the game by the visitors who made two attempts at goal.

The Golden Stars' defence line was a formidable one: the defenders used the advantage of their height which surpassed that of Adamawa United attackers to clear with header high ball crossed  by the host team from the 16 and 18 yards.

As the match progressed, Adamawa United changed its tactics from high-long passes to through passes on the ground.  In the 11 minute in the first half, Adamawa United attacker, John Paul got a through pass from the midfield and made the first shot on target for his club but the visitor's goalkeeper, Emmanuel James jumped, stretched his hand, punched the ball off the goal post.

In the 20 minute of the match, the host team revived and  dominanted the midfield which forced the visitors to resorted to defence tactics.

The Head Coach of the Badaru Boys, Okonna Gilbert made a technical change in the 30 minute; he substituted a side defender, Johnson Echiye with a central defender, Ibrahim Umar to check the excesses of Adamawa United attack.

The change had improved the visitor’s defence line and the game became balanced with attacks and counter attacks launched by both teams. However, In the 42nd minute,  the Centre Referee (CR) cautioned Adamawa United defender, Gege with yellow card for bad tackle on the Giant Killers' player.

The Giant Killers were able to hold Adamawa Boys to a goalless draw in the first half.
Two minutes into the second half, Isa Garba put a smile on the faces of Adamawa United fans when he finisher  from a long into the net of Badaru Boys.

Rhythm of drums accompanied with sound of trumpets and songs of victory from Adamawa United Supporters Club echoed in the stadium and the morale of Adamawa United players became high.

Badaru Boys' tactician who wanted to get at least a draw, made another technical substitution in  the 52 minute. He introduced Chukwuma Odili who  is an attacking midfielder, Philip Ugbodaga and Yusuf Mohammed came in for the injured club's Captain, Ekene Udoh in the  67 minute. Thus, the Giant Killers exhausted their substitution.
The Technical Adviser of Adamawa United, Coach Bello Mohammed had in the 71 minute made his first and technical substitution. He substituted Isa Garba who scored the only goal in the match with Marafa Bappa who played in the right flank.

The match became tougher resulting to Jigawa Golden Stars' midfielder who sustained an injury in a head-to-head contest on ball with Adamawa United player, and the midfielder was taken out of the field on stretcher. The player could not return to the field of playbecause of the severity of the injury he sustained; leaving the visitors with 10 players against 11 having exhausted their 3 substitutions.

In the 83 minute, Adamawa United tactically brought in Sanusi Umar for Saifullahi Bawa to strengthen the midfield and the attacking line. The change mounted more pressure on the 10 man Jigawa Golden Stars and attacks came from the centre, right and left flanks. What could have been a goal from a shot by the Adamawa Boys' new substitute, Umar was blocked by the number one goaltender of Jigawa Golden Stars, Emmanuel James who in the match bravery saved many goals for his club.

Adamawa United who wanted to add more goals on their opponent, had in 88 minute made a technical and final substitution. Mbidi Samson came in for Tijjani Adamu but that could not make any difference on the score line. The game ended: Adamawa United1-0 Jigawa Golden Stars.

Commenting on the outcome of the match, the Head Coach of Jigawa Golden Stars, Okonna Gilbert expressed dissatisfaction with the performance of his players and said that, he expected his players to play better than Adamawa Boys; but commended the match officials for been fair in officiating.

His Adamawa United counterpart, Coach Bello Mohammed who last season was the Technical Adviser of Adamawa Queens FC, lauded the performance of his players and expressed optimism that his boys will improve better and also give credit to the match officials for fair officiating. 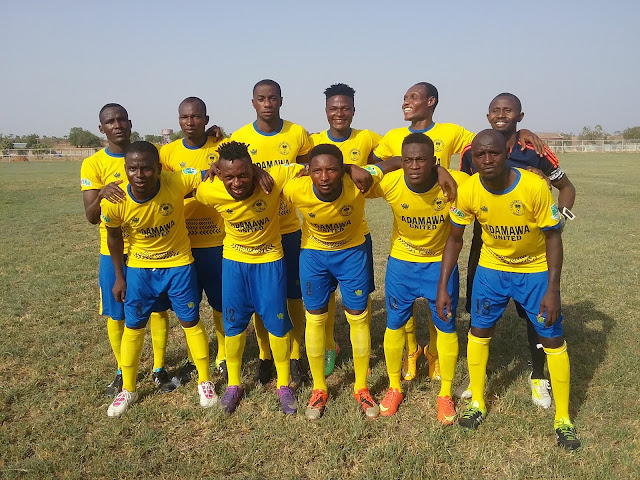