This was disclosed by the Honourable Commissioner Ministryof Information and Strategy,  Comrade Ahmad Ibrahim Sajoh alongside the State Attorney General and Commissioner for Justice BSD. Sanga and the Commissioner Ministryof  Health Dr.  Fatima Atiku Abubakar  who briefed Journalists at the end of the Fifteenth  State Executive Council Meeting(EXCO Meeting ) presided over by the Deputy Governor Engr.Martins Babale  at the Council Chambers of the Government House Yola.

According to the Information Commissioner, Government  had earlier  sent a delegation  to ECOWAS  Headquarters  and Peace  Building  Commission  at Kaduna for the sustainance of  peace and  peaceful coexistence and called on the people of Adamawa state to give peace top priority in order to move  forward.

The  Council had also deliberated and agreed to  send a delegation  on the spot  assessment of Cholera epidemic reported at Mubi  and also to do an in depth study of the  situation so that the disease  does not  escalate.

While commenting on the Cholera  out break, the Honourable Commissioner Ministry of  Health Dr Fatima Atiku Abubakar said her Ministry has set up an Emergency  response  team in order to curtailed the situation in the area ,maintaining that the  situation is  under  control at present.

Dr. Fatima Atiku Abubakar also said that the  Ministry of  Health  received a report  about the cholera  outbreak recently which claimed Twelve  lives.

On Judicial  system, the Attorney General and Commissioner for Justice Barr.Bala Silas Sanga said the  UNHCR  has completed Renovation and  convertion of a Majestry Court  into a High  Court at Ganye area, there by  creating Ganye Judicial  Division.

BSD. Sanga  explained that similar Court has also been  created at Numan and  Gombi Judicial  Divisions  so as to enable people of Adamawa  have access to  Justice.

He however  pointed out that  every Three  Local  Government Area of the state  would have a High Court  Division  in the state ,stressing that it is a  delibrate strategy  by the government to  opened up justice to the citizens of Adamawa state. 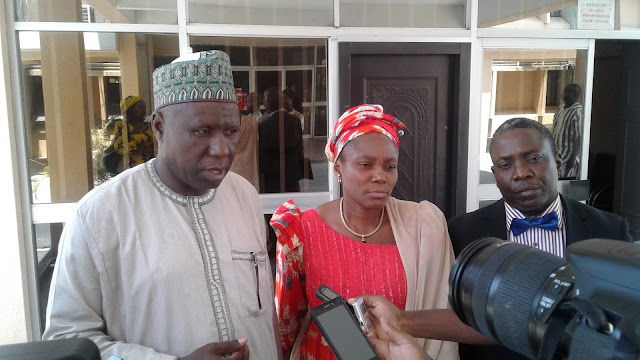