NEWS : Adamawa State Government to Collaborate with Development Partners in the Areas of Humanitarian Assistance.

The Adamawa State Government is to Collaborate with Development Partners in the Areas of Humanitarian Assistance in the state. Governor Muhammad Umar Jibrilla stated this when the Deputy Humanitarian  Coordinator for Nigeria, Mr. Yassine  Gaba led a delegation officials of International Donor Agencies  paid a courtesy visit on Governor Muhammad Umar Jibrilla at Government House Yola recently.

The Governor said his Government  has decided to  work with Humanitarian  Agencies in order to  provide  succour to Internally  Displaced  Persons in the State and appreciated  the efforts being made by  the Office of the  Coordination of Humanitarian Assistance by assisting the  Victims of  insurgency in Adamawa State.

He also explained that the State  Government in collaboration with the Federal Government and Traditional  Rulers to work  assiduously in solving  communal  clashes in the state, and commended  President Muhammadu Buhari for his commitment  in the fight against insurgency in the North East.

The  Governor also assured  OCHA  and  other Humanitarian Agencies in the state that Adamawa  is calm  and stable  in terms of security situation .

Earlier the Deputy Humanitarian Coordination  Office  for Nigeria,  Mr . Yassine Gaba had told  Governor Muhammad Jibrilla that  he was in Adamawa State  to familiarised  himself  with the activities  of OCHA  in the North East. He explained that the  major concern for OCHA  is to ensure that  victims of  insurgency had recovered by the intervention from the Humanitarian  Organisations ,pointing out that his office has built a comprehensive  response in Adamawa State .

The Deputy  Humanitarian Coordinator also explained that the  primary  objectives of the  humanitarian organisations  is to focus on the developmental  issues  by ensuring that Displaced Persons  had returned back to their normal life in the  insurgency  ravaged  areas.

He  further explained that the  problem of  Herders  and Farmers is not only peculiar  to Adamawa State but the entire West  Africa region as a whole.

Earlier in his remarks, the  Secretary to the Adamawa State Government  Engineer  Umar Buba Bindir  had enumerated some of the remarkable achievements being recorded by the present Government under Governor Muhammad Umar Jibrilla  which  includes  provision of  Roads  infrastructure,  Water  Supply,  Education, Health care delivery, Youth  Empowerment  among others. 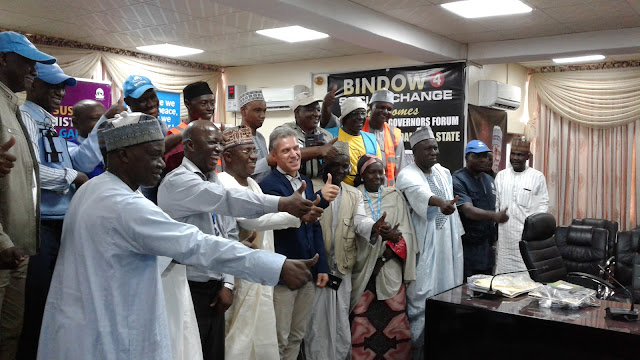