The Adamawa State Government has reiterated it's commitment in  fulfilling promises  made to the electorates of the state.

The  Honourable Commissioner Ministry of Information and Strategy, Comrade Ahmad Ibrahim Sajoh stated this during  a Press  Conference  on the  blatant lies peddled by a  section of the media particularly  online press to the effect that His Excellency Governor Muhammad Umar Jibrilla is under pressure to drop his Deputy for a Muslim candidate.

According to the  Commissioner of Information, some politicians in the state have totally lost political  value and  relevance and have resorted to use  Ethnicity and religion  as political currencies in the  run-up to the 2019 election and opts to use religion in the politics of Adamawa State.

Sajoh  also  warned Journalists to  always cross check and  report the truth with facts to the public as well as  to abide and uphold the  ethics  of the profession . He however  explained that the  present Government under the leadership of Governor Muhammad Umar Jibrilla remains  resolute and focused in its determination to  fulfilling it's mandates to the electorates of Adamawa State,pointing out that no amount of  blackmail, intimidation or the unholy use of Ethnicity, Chauvinism and Religious Bigotry, Political jingoism or Aghero -Journalism will derailed the Government.

Lastly, he advocated for developmental reportage as Journalists  are the watch dog of the society . 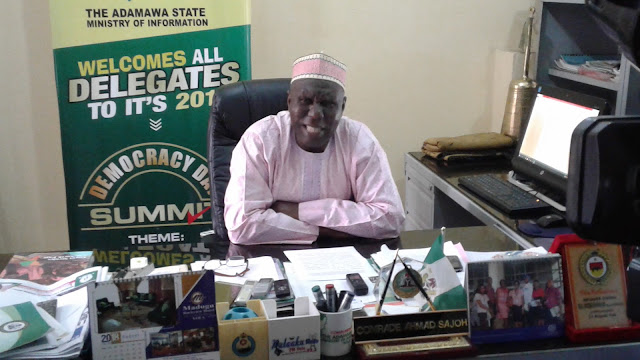