The Governor  was speaking  when he granted in audience the Igbo communities separately led by their leaders the Eze  Indi- Igbo  of Adamawa state  Chief  S O Ebis  and Chief  Fidelis  Umeh whi paid him a solidarity visit at Government House Yola recently.

He  then thanked Igbo Community  for their visit and assured that  government will continue to ensure that  lives and properties of its citizens are being maintained and protected all times, stressing that his administration is for everybody irrespective of ethnicity or  Tribal inclinations.

Earlier, the  leaders of the  Igbo communities residing in Adamawa state ,the Eze Indi -Igbo Chief  S.O  Ebis  and Chief Fidelis Umeh have told the Governor that they were at Government House Yola to thanked him and show their solidarity and support to the present administration under Governor Muhammed Umar Jibrilla.

They also commended the Governor for his giant strides by providing roads infrastructure and other social amenities to the people of Adamawa state as well as extend their gratitude  over the  recent  victory of the Governor during the  just concluded  APC  Governorship  primaries in the state.

The  Igbo  leaders  also appreciated the  Governor for appointing Two of  them as Special Adviser  and Special  Assistant to the Governor  into his government, assuring that the  Igbo people  will continue to  respect the  Traditional  institutions in the state.

They however assured the Governor that all the  Igbo votes are for Governor Bindow and will continue to support  him comes 2019 general election and no shaking. 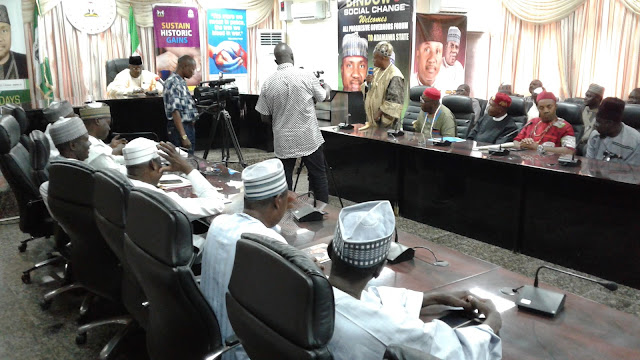