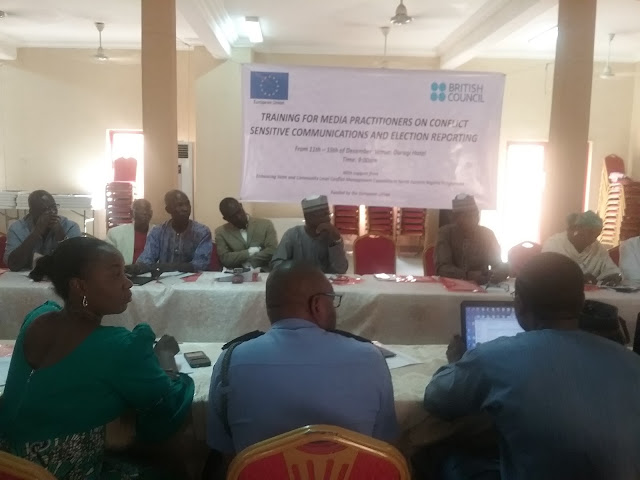 Media Practioners  have been warned against disseminating fake News, hate speeches and adhere to the ethics  of journalism in their reportage.

This was disclosed by Prof. Umar Pate, a resource person, at a 3-day sensitization workshop on training of media Practioners on reporting conflict sensitive communications and election reporting organised by the British Council,
on 12th of this month, at Duragi  Hotel in Yola-north Local Government Area.

In a welcome address by Dr. Ukoha Ukiwo, the technical lead MCN, said, the workshop is aimed at enhancing the capacity of journalists in election coverage and conflict reporting as  key stakeholders in promoting peace in the society. Also, to stem unethical professional conduct in reporting election and conflict.

There were paper presentations based on the  subject matter by different resource persons.The first paper was presented by Prof. Umar Pate, on the topic “Nature of conflict sensitive reporting towards the 2019 election”, where the presenter enumerated some legal and ethical issues in reporting, he admonished the participants to adhere too the legal and ethical requirements for reporting elections such as;  the APCON Law ( 71-72) : political  advertisement shall be issue oriented devoid of abusive statements and references ; They shall not employ false, distorted or unsubstantiated  claims or certain misinterpretations etc.

Also, the second paper presented was on the topic” Hate and dangerous speech in political reports and managing fake News in conflict  and election reporting” by; Mr. Bonat Tagwai, ( a resource person) . He said,” fake News are completely false information, photos or videos purposely created and spread to confuse or misinform” which is dangerous to our societies. He called on journalist, social media users to facts check before disseminating information. And if one is not sure of the sources and credibility of the content, do not disseminate.

Similarly, the third Paper was presented by Haj. Laurat AbdulSalam,  on the topic “ Gender and social inclusion of women in media and management of interactive media programmes”. In her presentation she stressed on the need to ensure women inclusion in political, social and economic aspects of national development. Also, ensure
implementation of 35% affirmative act in order to carry women along in all aspects of human endeavour. Haj. Laurat  cautioned those who  anchor interactive programmes to be careful in managing their programmes and shun away from abuse of professionalism.
In a their separate  closing remarks,  the British council  team leader Abdulkadir Bello Ahmed, charged the participants to utilise the knowledge they acquired in to practice in the forthcoming 2019 election reporting.

Also, the head of service Dr. Edger Amos, thanked  the organisers of the workshop for the timely intervention and called on the  beneficiaries to make good use of the experiences added. He further said, the issue of peace building is paramount  because as humans  conflicts are inevitable, but they can be managed through media intervention. Mr. Edger  called  on media to contribute immensely in promoting peace in their reportage.

Highlights of the workshop was presentation of individual and group action plans and award of certificates to the participants.