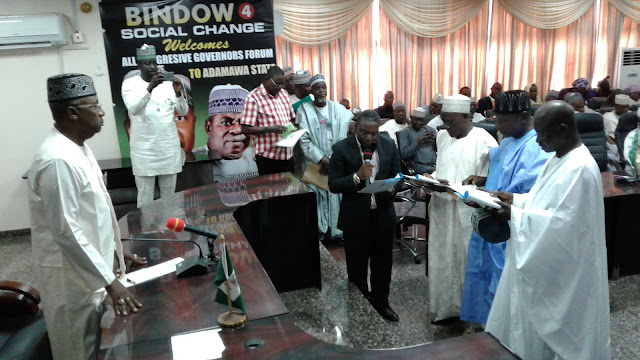 Governor Muhammad Umar Jibrilla Says Prudence and Accountability are the cardinal principles of his administration.

The Governor stated this while presiding over the swearing  in ceremony of Three  Additional Permanent Secretaries  into civil service.

Governor Muhammad Jibrilla explained that  public office is a public trust and  reminded  the New  appointees  to always abide by the Oath of Office taken  while discharging their official responsibilities.

He also  said that  their  selection  was  purely  done on merit and their tracks records while  in service.

Responding on behalf of the  Permanent Secretaries, Comrade  Usman Ahmed Dadah thanked Governor Muhammad Umar Jibrilla  for finding them worthy to serve as permanent Secretaries includes his government, and assured that  they will  contribute  their quota towards the development of Adamawa State.

The  Oath of Office was administered by the State Attorney General and Commissioner for Justice Barrister Bala Silas Sanga.