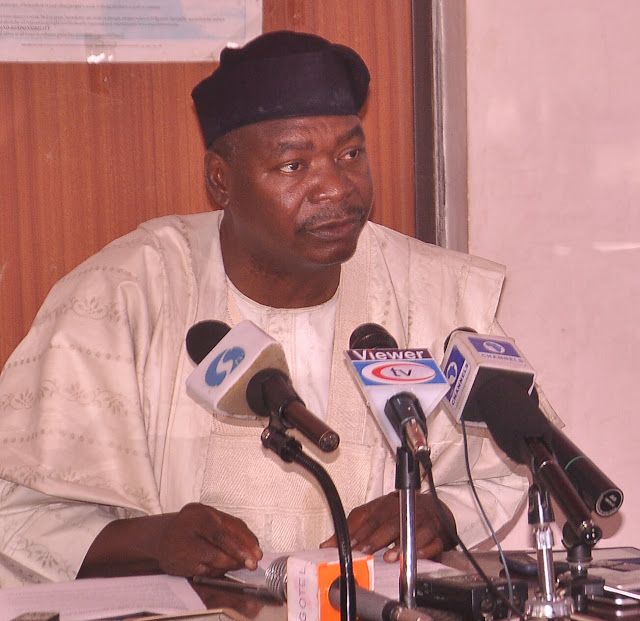 Today, 28 June, 2019 His Excellency, Ahmadu Umaru Fintiri is 30 days in office as the Executive Governor of Adamawa State. Within these days in office, the ATM Governor has made a mark in the lives of the people of Adamawa with a laudable initiative policies especially in the education, security and payment of outstanding salaries of civil servants in the State.

Our Government House reporter, Barnabas Augustine was at the press briefing by the Director-General Media and Communications Government House Yola, Solomon Kumangar. The excerpt:
In His inauguration speech and Maiden Broadcast to the State, His Excellency Governor AUF had vowed to initiate and sustain a constant conversation with the people of Adamawa State on what He is doing to address the problems they had elected Him to do.

In keeping with this vow, particularly with due regard to transparency and the accountability which His Excellency is sworn to up hold, we make bold to say that the Government has hit the ground running and is gaining momentum day by day.


The quest to make Adamawa State work again has started in earnest and is yielding the desire impact and results.

Primarily, we are on course in addressing the major security challenges bedeviling the State. So far we have moved against kidnappers and the Shilla boys menace.
Within three days of the expiration of the deadline His Excellency initially gave for criminal elements to shape or ship out, Sixty-Eight (68) Kidnappers and Two Hundred and Fifty-Two (252) Shilla Boys were arrested and detained.

More than One Hundred and Eleven others have voluntarily surrendered while the rest are on the run. His Excellency has since directed Security Agencies to cast their dragnets very wide and not allow the criminals to escape.

The Government has also initiated dialogue between farmers and herders aimed at ending the incessant disturbances especially in the Southern part of the State. In addition, a law to impose harsh punishment on all categories of criminals terrorizing the State, is before State Assembly, to provide the necessary legal bite for enforcement.

You are all aware that His Excellency inherited a State ravaged by insurgency, wracked by heavy debt and a decaying economy. He however has started a stimulus package by pumping money into the Civil Service and off-set two months’ salaries arrears of workers. He has managed to do this without imposing any debt burden on the State.

His Excellency has also taken steps to revamp education as part of His poverty reduction and empowerment agenda which is yielding salutary results.Governor AUF has not only ensured free feeding for Nine Junior and Senior Secondary Schools within the State capital but the programme will be expanded to cover Fifty-Eight (58) Boarding Secondary schools beginning from September 2019, as the new school year.


As a prequel to declaring free and compulsory education to shore up enrolment and halt the high level of drop outs, The Government has set as a target, the rehabilitation of Five Thousand Schools (5000) in the next Six Months in the first instance.

Governor Ahmadu Umaru Fintiri has also placed Health and Agriculture at the top of His to-do list. His Excellency’s visit to the Specialist and German Hospitals paved the way for immediate intervention in this Area.

In Agriculture, His Excellency AUF has approved in principles, the establishment of stock shops in the 21 Local Government Areas, where farmers can access farm imputs easily.

In general Administration, the Governor has moved to revamp Local Government councils after eight years of near dormancy by granting them full autonomy. The Governor had sent in Executive Bill to amend the Adamawa State Local Governments Administration law 2004, to pave way for the Constitution or Transition Committees which will include at least one woman each for all the 21 LGAs.

He has also directed Directors, General Services and Administration, to clean-up their wage Bills of ghost workers beginning from April 2016.

Gentlemen of the Press His Excellency has been able to make progress in a little under one month with little or no resources where distractors never gave him a chance to succeed. They have failed to realize that it is not the resources at one’s disposal, but how well one utilizes resources, that make the difference.

Let me conclude by saying that constant change has been the Hallmarks of Adamawa State, change for the better has been its set back; but Governor AUF is changing all that and many are inspired and fired by the belief that indeed, Adamawa State is in good hands.
11:47
Adamawa Daily Reports
Special Report
Email ThisBlogThis!Share to TwitterShare to Facebook