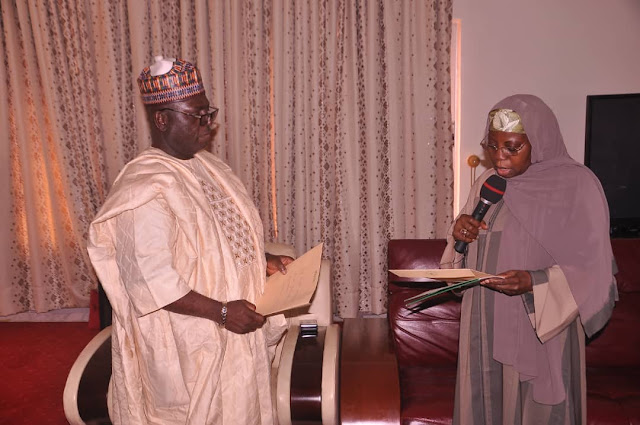 The First Lady of the Federal Republic of Nigeria, Haj. Dr. Aisha Muhammadu Buhari has condoled the Government and People of Adamawa State over the death of late Alh.  Adamu Aliyu Musdafa.
A strong delegation led by the Senior Special Assistant (SSA)to the President on media in the office of the First Lady, Dr. Hajo Sani said they were in Government House Yola on behalf of the First Lady to condole the good people of the State over the lost that shook the State recently.

Dr. Hajo while delivering the condolence letters to the Lamido Adamawa, His Royal Highness, Alh. Dr. Barkindo Aliyu Musdafa and Governor Fintiri identified some members of the delegation to include among others the wife of former Governor of Nasarawa State Dr. Mairo Almakura, wife of former Deputy Governor of Plateau State Pauline Talline and APC in Adamawa State Gubernatorial Aspirant during 2019 election Dr. Modi Halilu.

Receiving the letter on behalf of Governor Ahmadu Umaru Fintiri, the Chief of Staff Government House Yola, Prof. Maxwell Gidado, SAN,  thanked the first lady looking back home to condole the good people of Adamawa and added that the death of Adamu Aliyu Musdafa is a great lost to the entire people of the state.

Prof. Gidado, assured to deliver the condolence letter as soon as Governor AUF arrive and that of the royal father will equally be delivered and wished the delegation journey mercy to the Federal Capital Territory, Abuja.

Late Alh. Adamu Aliyu Musdafa was former Commissioner and  Secretary to the Adamawa State Government, all during the tenure of former Governor Boni Haruna, between 1999 and 2007.
Aged 57, late Alh. Adamu died in the early hours of 27th June, 2019 after a brief illness at the Federal Medical Centre Yola.

He left behind aged mother, four wives and seven children.
He has already been buried according to Islamic injunction at the ancient city of Yola on Thursday, 27th June, 2019.
08:32
Adamawa Daily Reports
News
Email ThisBlogThis!Share to TwitterShare to Facebook