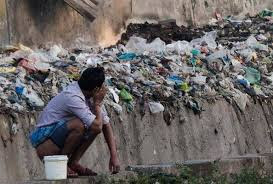 A global survey has identified Nigeria as the second in the world among countries where open defecation is prevalent.

Only India ranked worse than Nigeria in the Water Sanitation and Hygiene (WASH NORM) survey conducted by the United Nations Children's Fund (UNICEF). The Nigerian Ministry of Water Resources and National Bureau of Statistics took part in the Nigerian survey, an official said.

Apart from Nigeria, five other African countries are among the worst 10 where open defecation is prevalent. They include Ethiopia (3rd), Niger (7th), Sudan (8th), Chad (9th) and Mozambique (10th).

A Water, Sanitation and Hygiene (WASH) specialist, Bioye Ogunjobi, spoke about the survey on Tuesday in Ibadan.

He spoke at a workshop on 'Clean Nigeria: Use The Toilet campaign' funded by the European Union and UKaid, and implemented by the United Nations Children Fund (UNICEF).

According to Mr Ogunjobi, 47 million Nigerians, representing 24.4 per cent of the population, still practice open defecation.

Mr Ogunjobi said only 12 per cent of markets and motor parks in Nigeria have WASH facilities while 20 per cent have provided a place for washing of hands.

He said 32 million Nigerians are using unimproved toilets and do not have access to clean water and proper sanitation.

The specialist said diseases like pneumonia, diarrhoea and malaria, combined with underlying malnutrition, are responsible for most deaths of infants and children.

He said Nigeria's population of 12 million stunted children and two million children suffering from acute malnutrition are all as a result of bad sanitation system in the country.

Mr Ogunjobi, who said the use of unimproved latrine is as bad as open defecation, said only 13 local government areas in Nigeria spread across Jigawa, Bauchi, Benue and Cross River have been certified as Open Defecation Free.

According to him, only six per cent of primary schools have access to gender-sensitive toilets and WASH services in Nigeria.

Mr Ogunjobi explained that although, the government could not build toilets for all, this can be done through Public Private Partnership.

He said most Nigerians are yet to realise how deadly OD is to children under five years old, the public and the society at large.

He said the Federal Ministry of Water Resources is currently leading the ODF campaign to end open defecation in the country by 2025, and achieve universal access to safely manage sanitation by 2030.

Mr Osanyinpeju said this was being done with support from UNICEF, in partnership with inter-ministerial agencies, civil society partners, the private sector, and the people of Nigeria."

He said the Partnership for Expanded Water, Sanitation and Hygiene (PEWASH) programme was formulated and launched in 2016 in direct response to the challenges affecting the rural WASH sector.

The aim, according to him, was achieving 100 percent WASH coverage in rural areas.

"Clean Nigeria: Use the Toilet" campaign is one of the most ambitious behaviour-change campaigns in Nigeria with a strong citizen and public engagement component. The campaign to end open defecation is a key initiative that will reach many unserved populations."