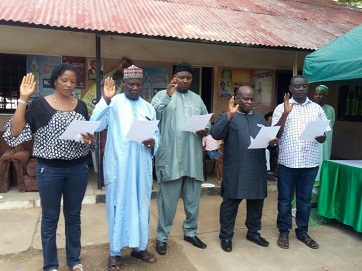 By: Hassan Umar Shallpella
Comrade Ishaka Donald Dedan of the Adamawa Broadcasting Corporation Yola has emerged as the new Chairman of the Nigeria Union of Journalist NUJ Adamawa State Chapter.

He scored 66 votes to beat other two contestants Kate Aliyuda of the Adamawa Television Corporation who polled 47 and Umar Dankano of the People’s Daily newspaper got 33 votes.

The election which was conducted on Saturday at the NUJ Press Centre Yola under a peaceful atmosphere was supervised by officials from National secretariat of the NUJ.
Also, Mr Fidelis Jocktan of the Fombina FRCN emerged as the secretary with 85 votes to beat Emmanuel Njampri of the Sunrise newspaper who got 65 votes.
Other officials elected unopposed include Abdullahi Ibrahim of the Adamawa Television Corporation, Vice Chairman, Shekarau Yarima of Gotel communications, Auditor, Mary Adamu of NTA, Financial Secretary, Isa Tukur of Adamawa Broadcasting Corporation, Assistant Secretary and Felicia Amos Dauda of The Scope newspaper, Treasurer.
The oath of office was administered by Barrister Mohammed Abdullahi of the State Ministry of Justice.
Certificates of returned was presented to the new leaders.In his post election speech, the newly elected State Chairman of NUJ Comrade Ishaka Donald Dedan thanked God for his victory noted powers come from God and gives to whomever he wishes and extended a hand of fellowship to the his fellow contenders, uged them to support the new leadership in order to move the NUJ forward.
Comrade Dedan also disclosed that the new leadership under his watch will carry everybody along and called for prayers to them to succeed.Comrade Dedan also appealed to the Adamawa State Government to come to the of NUJ to enable the council move forward.
In his remark, the Director General Media and Communication Government House, Yola Mr Solomon Kumangar expressed his willingness to work with the new leadership, saying state government is ready assist the NUJ for optimum development and progress of journalists in the state.
14:01
adamawadailyreport@gmail.com
News
Email ThisBlogThis!Share to TwitterShare to Facebook