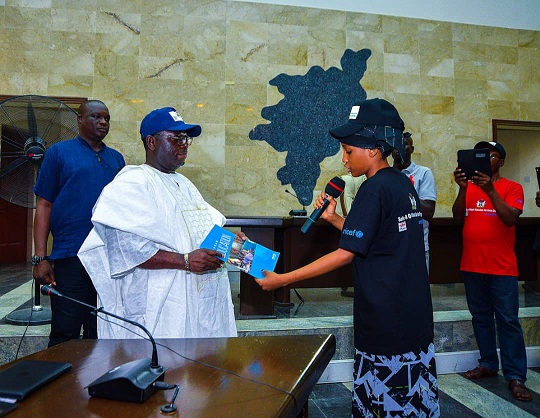 The Governor of Adamawa State, Ahmadu Umaru Fintiri has reiterated that education will be top priority of his administration as he promised the people of the state during the 2019 election campaign.

The Governor who was represented by Chief of Staff Government House Yola, Prof. Maxwell Gidado, SAN. said this at the end of 3 Day training for Youth Advocacy organized by UNICEF in collaboration with Adamawa State Universal Education Board (ADSUBEB) which coincided with the Day of African Child celebrated every 16th June at the Conference Hall in Government House Yola.

Speaking on the demands presented to the Government on education, Gov Fintiri said that his administration will work out for the counter fund funding for Universal Basic Education which was not access.

The UNICEF Education Consultant, Joel Isiah while speaking on the 3 Day sensitization and advocacy training for youths in the state said that 110 youths from 21 Local Government Areas of Adamawa State were selected from youth based structure of the state for the training.
On the Day of the African Child, the UNICEF Education Consultant said that “in Adamawa State over 489,855 children are out of school, while Nigeria has 10.5 million children who are unable to access safe and quality education including due to the ongoing crisis in the north-east”


He further said that there will be mass action in 10 states which have about 8 million children not in school and an average enrolment rate of only 57 per cent. These states are:  Bauchi, Niger, Katsina, Kano, Sokoto, Zamfara, Kebbi, Gombe, Adamawa, Taraba and the Federal Capital Territory (Abuja).
There was recap of the training received by the youths which was presented by one of the participants, Naila Bashir, which include: Education and National development, Gender and Girl Education, Effective Advocacy Strategy for Safety of Girl-Child, Essential of Communication among others.