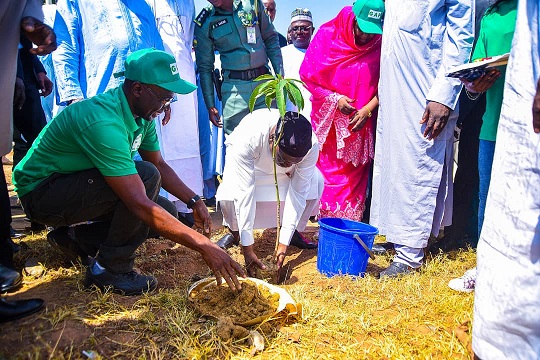 To mark World Desertification Day, Governor Ahmadu Umaru Fintiri has flagged off the planting of four million trees in Adamawa State in a ceremony that was held at the Banquet Hall, Government House Yola.

While performing the ceremony, the Governor said that land degradation and drought are critical problems not only in dry land, but also in human and sub humid ecosystem of Nigeria. Noted that within 3-4 decades about 43% of the forest system has been degraded through human activities.

The Governor maintained that Adamawa State Government in conjunction with the Green Wall Programme, a Pan African Organization launched by the African Union in 2005 to cushion the effect of desertification has embarked on the establishment of woodlots, shelterbelts and orchards in 7 LGAs in order to reduce the speed of desertification.

Earlier on, the Executive Director, Environmental Care Foundation (ECF) Yohanna Moses said that Northern LGAs in Adamawa State is face with the challenge of desertification, adding that his foundation will revive the 21 plant nursery across the State.

While delivering her speech, the Permanent Secretary Ministry of Environment, Mrs. Aisha A. Umar whose Ministry in collaboration with ECF will plant four million trees in Adamawa State, said that the World Day to combat desertification and drought is aim at promoting public awareness on the effect of desertification.

Mrs. Umar highlighted the causes of desertification to include: Excessive overgrazing in on lands in absence of adequate pasture, uncontrolled bush burning to clear land for agricultural activities and indiscriminate felling of trees for fuel fire wood and construction purposes. She also revealed that northern part of Adamawa State particularly Madagali, Michika, Mubi North, Mubi South and Maiha Local Government Areas are worst affected by desertification while Gombi, Guyuk and Song are face with the challenge.