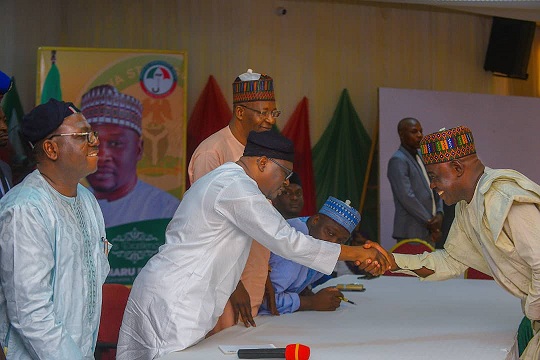 Governor AUF  broke the good news today when he granted audience to SDP Members in the State. He said that he will build 2000 houses for civil servants in order to make life easier for them.

He assured the civil servants of prompt payment of salaries with or without Federal Government subvention on 24th or 25th of every month.

Receiving the decampees, the Chairman of Adamawa State PDP, Barr, A. T. Shehu said that the Party has heartily accepted all the decampees and directed all the Local Government chapters of PDP to accept them. Barr. Shehu confirmed to the decampees that they are henceforth genuine members of PDP and they will continue to enjoy all the rights and privileges PDP members are accorded in the Party and call on the new PDP members to support the seating Governor to move Adamawa State to next level of development.

Earlier in his speech, the Leader of the decampees who was the former Chairman of SPD, Hon. John K. Muva said they were attracted by the laudable programmes and policies Governor Fintiri is implementing in the State. All the policies he added were in line with the developmental process of Adamawa State.

Hon. Muva  and the other decampees pledges their loyalty to Governor Fintiri and PDP. They joined PDP in mass, including their contestants  during the 2019 polls, SPD stakeholders and many of their supporters drawn from the 21 LGAs of the state.
13:18
Adamawa Daily Reports
News
Email ThisBlogThis!Share to TwitterShare to Facebook