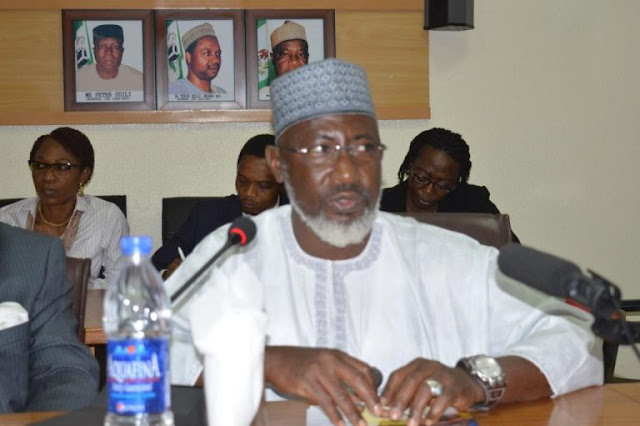 Dr. Sanusi who is also the Secretary General, Nigeria Football Federation said that they were at Government House Yola to congratulate Governor Fintiri on his recent victory in 2019 General Elections and to inform him on the hosting right for All Colleges of Education games which FCE Yola has won.
He said that the essence of the games is not to give the hosting right to colleges that have facilities but for the colleges that have potentialities to host the games. After inspecting FCE Yola, they discovered that the college has the necessary requirement Dr Sanusi said.

The President of NICEGA explained that FCE Yola has once hosted the All Federal Colleges of Education games, adding that anything that has to do with sports has significance bearing on the lives of people.
He noted that Adamawa will benefit from the games economically because athletes and other people from outside the states will come and spend money which will improve the economy of especially petty traders during the period of the games.

He further explained that sports is no longer a thing of fashion or relaxation, it now  becomes another source of empowerment to the youths. This is obvious in recent times where athletes have become rich, he added.
The NFF scribe said that the date for the All Federal Colleges of Education games will be decided by the NICEGA congress. Probably he said it will not exceed first quarter of 2020.

Dr. Mohammed Sanusi also said that Governor Ahmadu Umaru Fintiri has hi
nted them that Adamawa United Football Club has qualified to play in the Nigeria Professional Football League and the Governor assured them of his administration support for the club.

He therefore call on the management of Adamawa United to carefully select players that will make the state proud, noting that two Adamawa players are undergoing screening with the Under 17 National Team. The players he added were discovered by NFF during the recent concluded Hon. Binani’s Football Competition at the Jimeta Temporary Stadium.

It could be recalled that the President of NICEGA, Dr. Mohammed Sanusi at the closing ceremony of the 19th edition of the All Colleges of Education games held in Obudu, Cross River State handed the hosting flag of the games to FCE Yola on 23rd January, 2019.