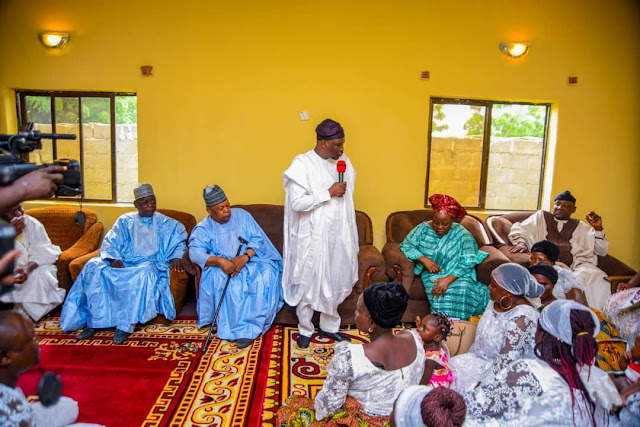 Governor Ahmadu Umaru Fintiri has said that the death of Kwandi Nunguraya, His Royal Highness Dr. Wilfred Kaunlu Kimde is a great loss to Adamawa State.

The Governor who led top government officials in the state to the palace of the late Kwandi Nunguraya in Guyuk, said they were at the palace on behalf of the people and government of Adamawa State to condole and commiserate with the people of Guyuk Chiefdom over the death of their monarch.

Governor Fintiri described the late monarch as a strong man dear to all and a man who left behind a legacy worthy to emulate.

While speaking on the selection of the new high Chief of the Chiefdom, Governor Fintiri enjoined the contestants to the throne to be law abiding, stressing that  power comes from God and He decide whom to give. And, promised to give the people of the Kingdom their desire high chief as quickly as possible. He therefore ordered the Secretary to the State Government to unveil the processes for the selection of the next high chief.

Governor Fintiri pray to God to give the people of the Kingdom the heart to bear the irreparable loss.


Responding, the regent of the Chiefdom, Air Commodore Dan Suleiman Rtd. thanked Governor Ahamdu Umaru Fintiri and his entourage for commiserating with the people of Lunguda Chiefdom. Noting that despite the numerous engagements of the Governor he embarked on a long trip to Guyuk to condole the people of Guyuk Chiefdom.

The regent assured Governor Fintiri that they will do the needful in the process of the selection of the Chief and pray for journey mercy for the Governor and his entourage.
Late Kwandi Nunguraya, Dr. Wilfred  Kaunlu Kimde was born on 31st January 1940 at Kita Tudun Guyuk in the present Guyuk Local Government Area.

The late Kwandi Nunguraya ascended the throne as 16th Chief of Lunguda on 23rd April, 1999 to succeed Alhaji Garba Sheji both of the Bongsiye Clan.

The High Chief died at the age of 79 on 1st August 2019 after stayed on the throne for 20 years at the Federal Medical Centre Yola after a brief illness.

Late Kwandi Nunguraya, His Royal Highness Dr. Wilfred Kaunlu Kimde is survived by his wife, HRH Elenah Wilfred Kimde, 7 children and 14 grandchildren
The monarch has been buried on Thursday, 8th August, 2019 after a traditional rites and service of songs in Guyuk.
11:56
Adamawa Daily Reports
News
Email ThisBlogThis!Share to TwitterShare to Facebook