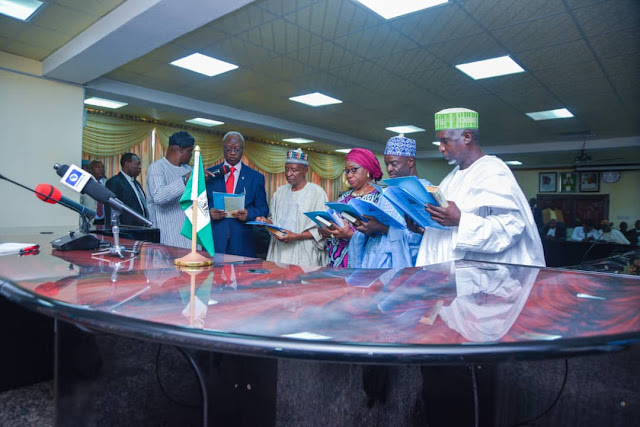 Governor Ahmadu Umaru Fintiri has sworn in the first Commissioner in his cabinet and Members of the Judicial Service Commission of Adamawa State with a charge on them to produce their best.
While congratulating the newly sworn in Attorney-General and Commissioner for Justice, Barrister Afraimu K. Jingi and four Members of the Judicial Service Commission: Abubakar Mohammed Pariya, Suleiman Musa, Hon. Justice Ambrose Mamadi and Barr. Mrs. Christy Dennis Goje.

Governor Fintiri said that his administration is a serious one that comes to salvage the State. He therefore urged them to produce their best in the course of executing their statutory responsibility having them selected best on merit.

Governor Fintiri further enjoined the sworn in Attorney General and the Judicial Service Commission members to work in line with the policies of his administration so as to make Adamawa great again.
The Governor who said his administration has formulated good policies for Adamawa State, called on the newly sworn in officers to implement the policies to the latter and for the best interest of the good people of the State.

The number one citizen of the State explained that his administration has given the Judiciary top priority having it be the last resort and a hope of the masses; admonished the arm of the Government to ensure speedy dispensation of justice for the best interest of the State. And, called on the Judiciary to ensure the welfare of the members of their staff is also prioritized.

The oath of office, allegiance and that of secrecy was administered to the Chief Law Officer of the State, Barrister Afraimu K. Jingi by the Chief Judge of the State Justice Ishaya Kida Banu.
The Attorney -General and Commissioner for Justice starts his first assignment with the administering of oath of office to the four members of the Judicial Service Commission.

Responding on behalf of the sworn in officers, Barrister Afraimu K. Jingi thanked Governor Ahmadu Umaru Fintiri for finding them worthy to serve Adamawa State. The Attorney -General assured the State that they will do the must desired and promised their total loyalty to the Governor Fintiri’s led administration.

The Chief Law Officer maintained that with the quality of Lawyers in the Ministry of Justice, they will defend the interest of the State at any court of competent jurisdiction when the need arises.
12:59
Adamawa Daily Reports
News
Email ThisBlogThis!Share to TwitterShare to Facebook