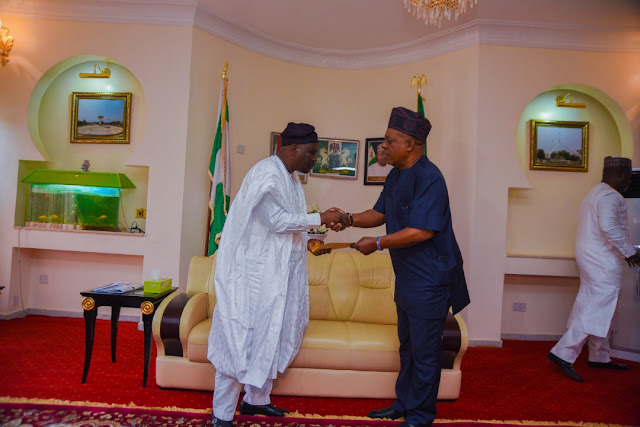 Led by the PDP’s National Chairman, Prince Uche Secondus and received by Governor Fintiri at the Presidential Lodge of the Government House Yola, Prince Secondus said they were in Adamawa State to commiserate with the Governor and the good people of the State over the death of the father of the number one citizen of the state.

Prince Secondus explained that the death of late Alh. Umaru Badami is great loss to the nation while describing death as an inevitable act which all mortals must taste. He further described late Alh. Badami as a man of reputable character who taught good morals to Governor Fintiri and enjoined the Governor to follow the good steps of his late father. 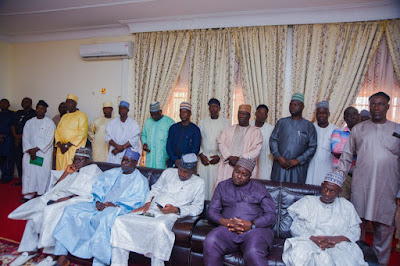 The PDP National Chairman also used the medium to express his joy over the laudable achievements recorded by Governor Ahmadu Umaru Fintiri within less than 100 days in office which he stressed has positively turn the story of the State. Prince Secondus admonished the Governor to keep it up.
Responding, Governor Ahmadu Umaru Fintiri has thanked the PDP NWC for the visit and the love they shown him and the people of Adamawa State over the loss of his father.

Governor Fintiri also thanked the visitors for the words used to described late Alh. Umaru Badami and the prayers over repose.

The Governor explained that within 60 days of his swearing-in as Governor of Adamawa State, he has implemented some policies that has turned the fortune of the poor people of the state. Maintaining that the policies were for the interest of the masses.

He therefore announced that in conformity with the laid down agenda of his administration, he sent a name of the Commissioner for Justice and  Attorney General of the State, a reputable lawyer who has been screened by the State House of Assembly and will be sworn-in on Tuesday.
The Governor thereafter wished the PDP NWC safe journey to their respective abode.