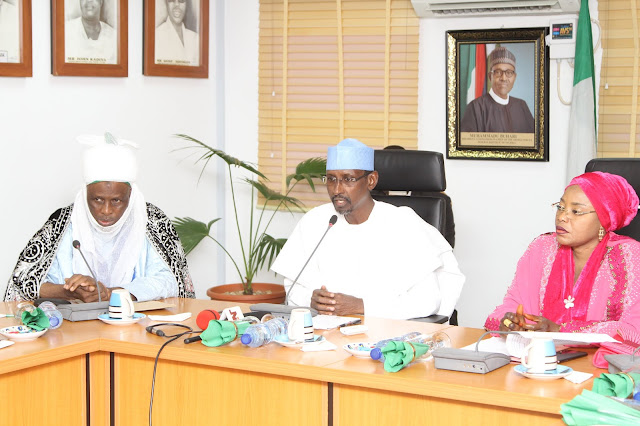 1.   Traditional leaders in the Federal Capital Territory (FCT) have commended the FCT Minister, Malam Muhammad Musa Bello for achievements recorded in the FCT over the last four years.

2.   The commendation was made during a courtesy visit by a delegation of graded chiefs in the Territory to the FCTA.

3.   In his remarks, the leader of the delegation, and Ona of Abaji, Alhaji Adamu Baba Yunusa, commended the FCT Minister for the tremendous success recorded in his first tenure especially with the completion of on-going and abandoned projects.

4.   Alhaji Baba Yunusa who is also the Chairman, FCT Council of Chiefs said that the visit was to formally congratulate Malam Muhammad Musa Bello on his reappointment as FCT Minister and Dr. Ramatu Tijjani Aliyu on her appointment as the Minister of State. He also thanked President Muhammadu for recognising and honouring the duo.

5.    While urging both ministers to build on the success recorded in the past, the Ona of Abaji said "We are happy with your programmes and policies which were community development-driven. We therefore wish you will continue with these policies so that the entire FCT can feel the impact of your leadership”.

6.   He continued "You have equally made a landmark in project execution and delivery which is a testimony that you appreciate value for money as such abandoned projects were identified and completed during your first term in office. It is our hope that the Minister of State will key into this step for the general development of FCT and its residents."

7.   Speaking on peace and security, the Ona said: "We cannot express our thanks and appreciation enough in this speech, you have indeed done wonderfully well in tackling our security challenges”."

8.   Malam Bello, while responding, thanked the royal fathers for their support in his first tenure and appealed to them to also support him this time around and also extend the same support to the Minister of State.

9.   According to the Minister, the continued support from the chiefs would enable the FCT Administration to achieve the mandate given to them by President Muhammadu Buhari for the development of the nation's capital.

10.                Bello also indicated that his Administration would work closely with the royal fathers and other critical stakeholders with a view to developing the FCT of which every Nigerian will be proud.