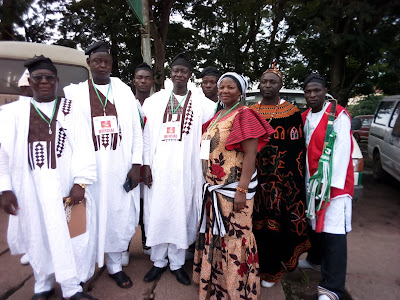 The official kick off of NAFEST, started today
in Edo State. The kick off saw a number of
States contingents even as far as Zamafara.
In the opening statement by the Director General,
Art Council Edo State, he said  State has pride it
self with its long standing cultural heritage and
since the theme for this year's event is "Our
Culture Our, Pride", he is very hopeful that the
State will win all the competitions and crown
overall best.

This is the 32th series of the event.  After 30
years they are hosting the event. So he is
every hopeful they will win all the competition
s at the events. He also praised the present
Governor of Edo for the much interest in arts,
and he has made a lot of effort to see that most of the artifacts stolen from the state during colonial rule are
brought back to the state. He concluded by saying that because of the gathering,  Nigeria will be great again.

The Permanent Secretary, Mr Titus Adamu, said he is very optimistic that Adamawa will win a cup too, he is also
full of praise to the Governor of Adamawa for the financial backing.

DPS Mrs Sasso, in her statement was full of praise to the Governor,  Ahamadu Finitri for the support given to
Adamawa contingents. She is very optimistic too of winning a cup from either one of the competitions.
The official ceremony kick with the opening of the calabash, a march pass by all state contingent and an theatrical
by the host state.
Attachments area
18:26
adamawadailyreport@gmail.com
news update
Email ThisBlogThis!Share to TwitterShare to Facebook