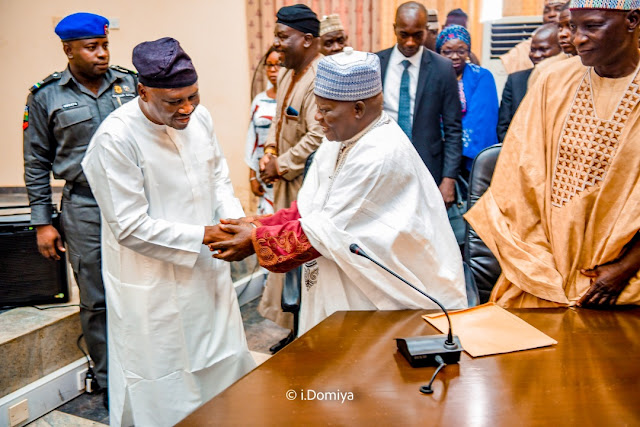 Governor Ahmadu Umaru Fintiri has today, Monday give audience to the people of Bare from Numan, Bille from Demsa and Yungur from Song Local Government Areas at Government House Yola.

In a separate courtesy call, the communities were at the Government House to applaud Governor Fintiri for his transformation policies and to table their most pressing needs in their respective community.
The leader of the delegation of the Bare people, the District Head of Bare Jackson Amna lauded the security architecture of Governor Fintiri which he said is yielding positive result on their community.

The District head who said they were at Government House to thank Governor Fintiri for approving the construction of Bare road and to congratulate him on his recent victory at the Election Petition Tribunal said that Bare people are enjoying peace in their communities having the military stationed in Bare. Adding that they ae now going to bed with their eyes close. 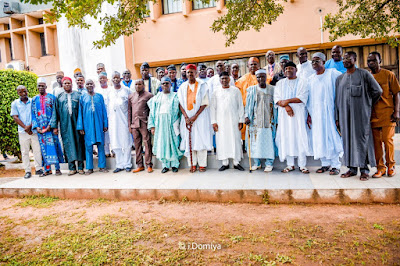 He appeal to the Governor to use his office to request from the Brigade Commander, 23rd Armoured Brigade to extend the period of stay of the military stationed in Bare so that peace can be achieved and sustained.
District Head Amna, also, appeal to Governor Fintiri to consider his people during appointment of  political office bearers.

In the same vein, the leader of the delegation of Yungur people, Chief Hon. Justice Adamu Hobon, (rtd) said that they were in the Government House to congratulate Governor Fintiri for his victory at the poll and at the Election Petition Tribunal, to thank him for retaining their son, the Head of Service, Dr. Edgar Amos in his position and for the timely intervention in herders/farmers crisis which hitherto has engulfed many lives in the area.

Chief Hon. Justice Hobon (rtd) made a special plea on behalf of the Yungur people to Governor Fintiri to check the excesses of kidnappers who are using the mountainous terrain of the area to hide their victims. Adding that the activities of the kidnappers is becoming unbearable, having them frequently kidnapping people.

In his separate responding to the communities, Governor Ahmadu Umaru Fintiri thanked them for their unflinching support to his administration and assured them that his administration will continue to protect the lives and propertioes of the people of Adamawa as already captured in his 11 point agenda, which is his number priority.

While assuring that his administration will review their demand, the Governor said that his government is collaborating with the security agencies and operation is ongoing in Song LGA to comb the area where it has become a hideout for kidnappers. Stressing that if the need arise he will deploy technology to track kidnappers.
He assure the communities who he described them as his friends of dividends of democracy.