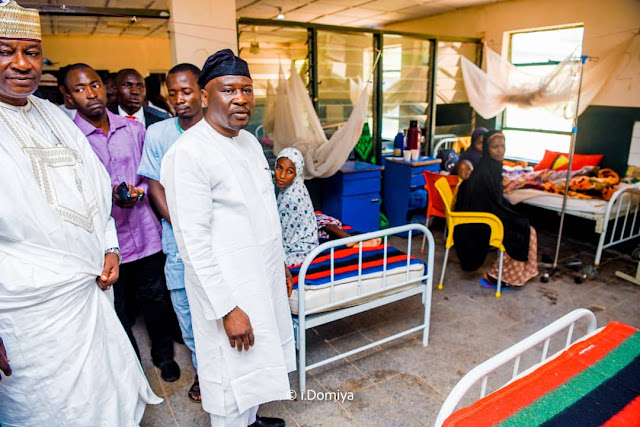 As part of his two-Day official visit to Mubi, Governor Ahmadu Umaru Fintiri of Adamawa State has said that his administration will upgrade General Hospital Mubi to be a referral centre for the Northern Senatorial Zone with more medical staff to match the number of patients going to the hospital.

The Governor said this while fielding questions from journalists shortly after assessing the health facilities at General Hospital Mubi which has being a referral centre of the zone .

“What I have seen so far, the structures are relatively good but we need to upgrade the facilities and equipment in the hospital and probably the management has to be improved. Governor Fintiri explained.
“Particularly the numbers of doctors and nurses we have here, we have to match it with the number of patients that we received in the hospital”.

The Governor said that his administration has done relatively well in the primary health sector by given them all their counterpart funding and supporting them financially when ever they demanded.

Adding that at the secondary sector, the government has resolved to embark on on-the-spot visit, to assess and meet their pressing needs; which was why he was at the General Hospital Mubi.

“Very soon the we will see turn around in the health sector, because it’s one sector that we can’t neglect; and education and health sectors has to go hand-in-hand by any serious government” Governor Fintiri hinted.

Governor Ahmadu Umaru Fintiri said that the development will affect all the three senatorial zones because he was elected to make Adamawa work again.
06:47
adamawadailyreport@gmail.com
News
Email ThisBlogThis!Share to TwitterShare to Facebook