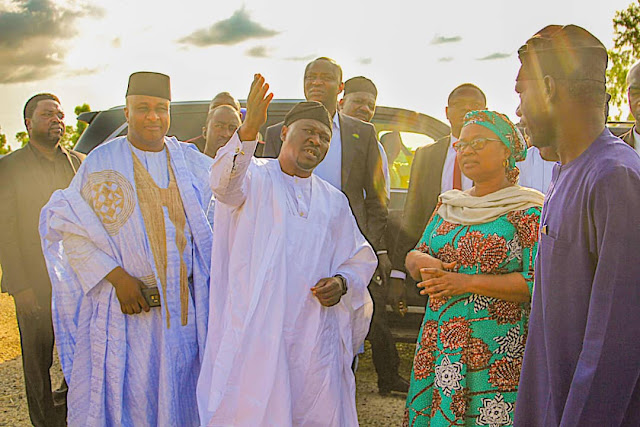 The Executive Governor of Adamawa State, Rt. Hon. Ahmadu Umaru Fintiri has said that his administration will build 2,000 capacity hostels for students of Adamawa State University (ADSU) Mubi as part of his education policy to revitalize education sector in the state.

The Governor who was in Mubi for a two-Day official visit, made the revelation in ADSU while he was taken round the institution by the acting Vice Chancellor, Prof. Kaletapwa George Farauta in company o9f some management staff to see for himself the state of the art facilities in the highest learning institution.

“We will continue to do our best to see that this institution has reclaim its  position as institution of excellence, so that by the time you graduated, you will be proud of this institution” Governor Finiri told ADSU students while going round their hostels.

The number one citizen of the State, explained that he was briefed by the newly constituted Governing Council of the University that for the past eleven years the institution has not convocate students. The Governor therefore assured the students that his administration will work towards that to convocate all the eleven sets.

While commending the Vice Chancellor for embarking on major renovations on the students’ hostels during their long vacation, Governor Fintiri said that: “We have designed and approved the construction of hostels that will house 2,000 students.

“Also, we will ensure that we reposition our dear university... We will build three more Faculties.
“And above all, what I will do on my side, before December, you will get your scholarship” Governor Fintiri concluded.

Earlier, Governor Ahmadu Umaru Fintiri starts the visit with a homage on the Emir of Mubi, Alhaji
Abubakar Isah Ahmadu at his palace.

The Governor reiterated his commitment in dealing with the menace of kidnapping and o9ther social vices bedevilling Mubi zone.

Governor Fintiri also assured the Emir the readiness of his administration to complete abandoned projects by his predecessor while narrating the economy potential  of the area to internally generated revenue of the state.

In his remark, the Emir thanked Governor Fintiri for visiting his domain and assured the Governor the Emirate support and cooperation of his people.

The Emir who described Governor Fintiri as “man of his word” call on his subjects to give the Governor the unflinching support he deserve for the growth and development of the people of the area.

Meanwhile, Governor Ahmadu Umaru Fintiri was at the Mubi township water treatment plant where renovation of the plant is ongoing in collaboration with the European Union and Adamawa State Government.

The Governor appreciated the level of the repair on the plant while he was taken round by the site engineer, Engr. Stephen Ali.

According to Engr. Ali, if the plant becomes fully operational, it will end shortage of drinking water in Mubi and environs.