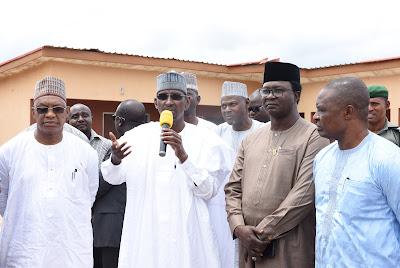 Minister of the Federal Capital Territory, Malam Muhammad Musa Bello has restated the commitment of the FCT Administration towards the provision OF affordable housing for workers in the Federal Capital Territory.
Malam Bello, who made this disclosure in Abuja on Friday during an inspection visit of the ongoing NLC/TUC Mass Housing Estate at the Apo District of the Federal Capital Territory, said the provision of affordable housing for workers was one of the cardinal objectives of President Muhammadu Buhari’s Administration.
The FCT Minister, who was accompanied on the inspection visit by the President of the Nigeria Labour Congress, Ayuba Wabba, specifically stated that President Buhari has mandated the FCTA to build at least 5,000 affordable housing units for workers and other Nigerians residing in the Federal Capital Territory.
He said the prime location of the 3,600 unit Civil Service Housing Estate, was carefully selected by the FCDA to ensure accessibility via a proposed 10 lane ultra-modern expressway that would pass near the estate, going all the way down to Gwagwalada.
The Minister assured that the key issues of infrastructure provision will also be addressed by the FCDA to ensure the speedy completion of the project.
According to the Minister, “I am speaking the mind of Mr. President that housing, especially for workers, is a very important cardinal objective of this administration and this kind of project will meet that objective.”
He continued: “President Muhammadu Buhari all his life has always been a man of the people and most of those that voted for him were the workers, the farmers and the petty traders. So, I came in here this morning with the President of the NLC to come and see the NLC/TUC Housing Estate under construction.
“Obviously you can see it’s in a very prime location. Substantial work has been done and I’m very confident that the challenges will be surmounted. Even my humble self as Minister, part of the mandate given to me is to ensure that we build 5,000 houses and we are working towards that. So, this is good and is commendable. There are challenges but by the grace of God, we will surmount the challenges,” Bello said.
The NLC President, in his response said Nigerian workers were very passionate about the provision of shelter, noting that the desire of every worker is to have a roof over his head before retirement from the service.
“So, this project is very dear to us and also all Nigerian workers. It’s a concept that was developed to make affordable housing possible to Nigerian workers. It’s not like any other project. It’s tagged affordable and that’s why the prices were actually set from the beginning. We are not leaving it to market forces.
“I am extremely happy that when we approached the Honourable Minister, he said that he wanted to personally visit and inspect the ongoing work and I think this is a demonstration of commitment”.
He continued, “I can say that Nigerian workers that subscribed to this project, if they see this today, they will be extremely happy because they want these houses to be completed and they want also to be part of this historic process of making sure that those houses are actually delivered,” he said.
The Minister went on the visit with the Permanent Secretary of FCDA, Sir, Chinyeaka Ohaa, the Executive Secretary, FCDA, Engr. Umar Gambo Jibrin and other senior members of staff.