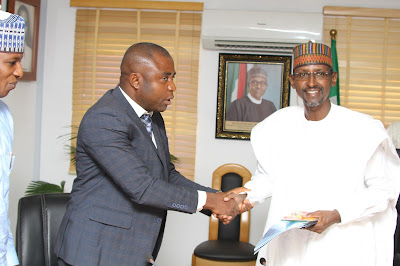 The Honourable Minister, Federal Capital Territory (FCT) Malam
Muhammad Musa Bello, has commended the Special Ministerial Task
Team on Traffic Decongestion along AYA/Nyanya for delivering on its
mandate of decongesting traffic on that road axis within a very short
time frame.

The Minister made the commendation when he received the interim report
of the activities of the Task Team in his office. Speaking further, he said that
his conviction that the affairs of  Nigeria can be changed for the better has
been buttressed by the zeal and dedication the Task Team put into the
assignment and the result it achieved in record time.
\
He stressed that the problems of managing the FCT are from within and these
can be fixed with and by dedicated people who will put in their best and
be committed to make the difference. He assured that all the recommendations
made by the Task Team will be implemented.

In the words of the Minister,  “The conviction of our dear President that if we all
put in our best we can change this country, and this has been clearly
demonstrated by your well-coordinated team. It shows you also that all the
solutions to all our problems are actually within us, it’s just a matter of everybody
being dedicated, putting in their best”.

He then advised that there was a need for coordinated and concerted efforts by all
stakeholders for things to work. He continued “… one tree cannot make a forest
and you cannot survive if you are just an island. So you have to relate with
people around you, relate with relevant officers and at the end of the day if we all
do that, Nigeria is going to be better”

In his presentation , the Chairman of the Task Team, Mr Ikharo Attah
emphasized that there was a need to sustain efforts to check the excesses
of motorists, as even the current  expansion work by the Federal Government
on that road will not make a difference if this was not done.

According to Mr Attah one of such excesses was the unwillingness of  uniformed
personnel to obey traffic rules and comply with road traffic directives. He also
said that many drivers lacked lane discipline and exhibited arrogance while
driving with little consideration for the rights of other road users. He also
explained that traffic clogging at the Nasarawa State axis of the road made it
difficult for the Team to manage traffic. He therefore reiterated that the FRSC should be involved
in the simultaneous control of traffic in Nasarawa State and the FCT.

Recommendations made by the Team include a total stoppage of roadside
trading, concerted enlightenment campaign for uniformed personnel and
immediate fixing of potholes along the road that hinder the free flow of traffic.
It would be recalled that the FCT Minister, Malam Muhammad Musa Bello
had inaugurated the Task Team two weeks ago with a  mandate to clear
the traffic gridlock and ensure free flow of traffic along the AYA/Nyanya
road as part of measures by the Administration to ease the discomfort of
motorists who ply that route on a daily basis.