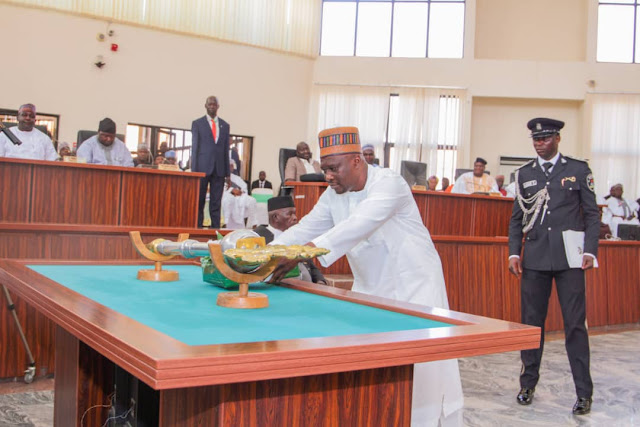 Governor Ahmadu Umaru Fintiri has presented to Adamawa State House of Assembly Members 2020 propose estimated budget during their plenary on Tuesday at the House in Yola.

Governor Fintiri who was accompanied by top Government officials and other politicians in the State stated that the budget for the fiscal year 2020 is estimated one-hundred and eighty three billion three hundred and sixty million six hundred and ninety nine thousand four hundred and eighty five naira (N183,360,699,485.00), to finance both recurrent and capital development project in the State. And, it was tagged “Budget of Rebirth”.

The Governor further explain that the Budget is articulated on the current National Economic indicators of $55 per Barrel, 10.36% inflation rate N350 per $1 exchange rate and 3.16% GDP economic growth.

“The projected oil price is based on the current oil price volatility in the world which is 2.18 million barrels per day” Governor Fintiri explained.

Governor  Fintiri hinted the House that the revenue for the proposed 2020 Budget, the highest  will come from Capital Receipts over N97 billion and Statutory Allocation over N42 billion.

Responding, the Speaker Adamawa State House of Assembly, Rt. Hon. Iya Abbas assured the speedy passing of the 2020 proposed estimated budget for the State and continue cordial relationship with the Executive Arm of Government.
23:23
adamawadailyreport@gmail.com
news update
Email ThisBlogThis!Share to TwitterShare to Facebook