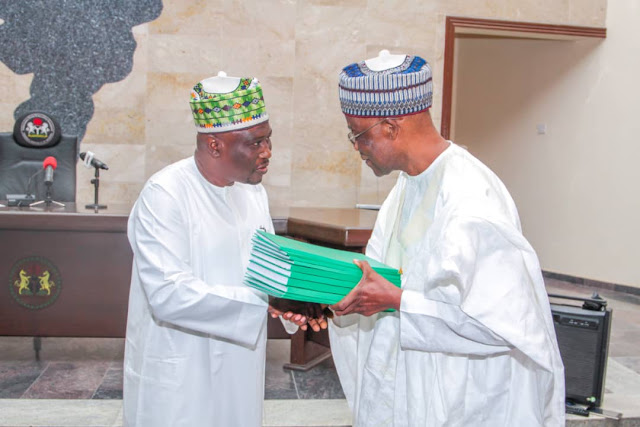 Governor Ahmadu Umaru Fintiri of Adamawa State has on Wednesday ordered that the Permanent Secretaries who were appointed while they were not on Grade Level 17 to be dropped with immediate effect.

The Governor gave the directive during the report presentation of the Technical Committee for the Evaluation of Adamawa Civil Service at the Conference Hall Government House Yola.

Governor Finitiri who  commended the committee for a thorough job that will revitalize the civil service in the state said that it is the responsibility of the Government to make sure that the abuse in the Civil Service is corrected.
The Governor assured that he will immediately appoint members of committee that will bring out a white paper that will implement wholly the recommendations of the Technical Committee for the evaluation of Adamawa Civil Service.

In respect to promotion in the Civil Service, the Governor dropped all Permanent Secretaries who were appointed undeservedly.

While summiting its report, the Chairman Technical Committee on Evaluation of Civil Service, Engr. Benson Jelani, mni said that during their findings they were able to discovered three major abnormalities in the Civil Service.

Firstly, there is a policy in circulation of complete embargo on employment in the State for a long period of time which is making negative impact in the Service. He noted that a lot of vacuum has been created as a result of retirements of Civil Servants without employing qualified people to replace them.

Engr. Jelani stressed that ordinarily in the Civil Service, Civil Servant suppose to give at least six months notice of his retirement. But there is practice of promoting Civil Servants in lest than six months, weeks or days to their retirement which has a negative impact on the service. For, they are quitting the service which they will no longer be productive to it.

This he said is done for the financial benefit at retirement and is causing a lot financial burdens on government while paying gratuities and pensions.

The third one the chairman of the committee said is the office of the Deputy Permanent Secretary. Engr. Jelani stated that the time when the office of DPS was set up, it may be was with a good intention.

However the committee observed that the Office of the PDS is not enshrined in the Civil Service Scheme of Service which is why in the Federal Civil Service there is no office of the DPS and in the 36 States of the federation only few have it.

“Appointment into the Civil Service by constitution required geopolitical consideration that is, representation of all Local Governments”.

He further explained that by the time a Civil Servant becomes DPS , he resume as a manager and he can be posted to any Ministry, Departments and Agencies, but the committee found that some DPS are still performing the functions of a Director while Director is also there.

The committee therefore recommended that complete embargo on employment as a policy should be re-examine. And, instead have a restricted employment so that whenever there is need for employment qualified people should be employed.

Secondly the unnecessary promotion should be discouraged..
And, because of the office of the DPS is not in the scheme of Civil Service, it should be gradually fade out.
01:09
adamawadailyreport@gmail.com
News
Email ThisBlogThis!Share to TwitterShare to Facebook