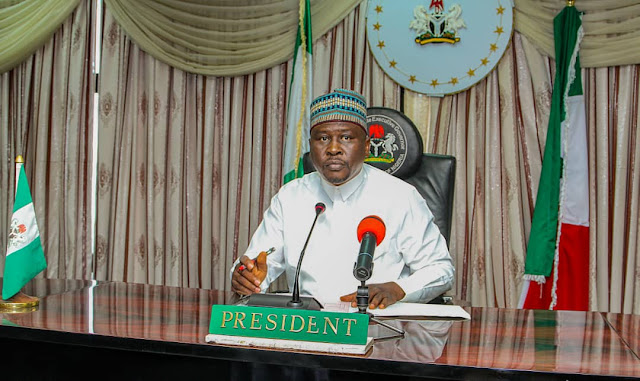 Governor Ahmadu Umaru Fintiri has on Monday held inaugural meeting with the members of the Adamawa State Executive Council.

The meeting which was held shortly after the swearing-in of the commissioners in the State, was held under close door at the Council Chamber, Government House Yola.

Briefing Reporters of Government House Yola after the meeting, the Honourable Commissioner, Ministry of Information and Strategy, Dr. Umar Garba said that the two important issues discussed at the meeting are how to develop Adamawa, urging the people of the State to exercise patience as the Government and its entire cabinet members are committed to working towards that.

Dr. Garba said that the second issue they discussed was on the 2020 proposed budget of the State. He explained that the budget which was prepared by the State Ministry of Finance and Budget was tagged “Budget of Rebirth”.

And, the council members have all agreed that the budget is realistic to some extend. Stressing that is a complete departure from what has been on ground from a very long time, which was having budget with a borrowed template.

Noting that in the past figures were spelt without knowing where to get it, which was partly why there was violence in performance and expectations.

The Government mouth piece express optimism that the 2020 budget which will be presented to Adamawa State House of Assembly hopefully Tuesday, 26 November will be realistic. Because is a budget that is aim at given Adamawa a new life.

On his part the Commissioner of Finance, Dr. Ishaya John Dabari said that they have reviewed the performance of 2019 budget from revenue and expenditure.

Adding that the level of performance of the budget though is below fifty percent, but yet is impressive.

In the 2020 budget, the Finance Commissioner ssid they did not use the incremental approach where by there are continue percentage increment across the head and sub-heads.

This time he explained it was done base on actual review on assessment; the previous years budget was reviewed downward not upward as the case use to be so as to reflect the reality on ground.
Dr. Dabari assured that if the State assembly approved the 2020 proposed budget as it is, it will take Adamawa to next stage of development in terms of performance.

While the Commissioner of Education, Hon Wulbina Jackson said that the budget was not draft to impress people but to make the people of the State realise that the present administration is on ground to provide the dividends of democracy.

Stressing that in the 2020 propose budget, education is given priority because that was what the present administration promised the State during its campaign.