Home » news update » NEWS UPDATE;Governor Finitiri Swears-In 23 Commissioners With a Charge to Correct the Ills of the Past

NEWS UPDATE;Governor Finitiri Swears-In 23 Commissioners With a Charge to Correct the Ills of the Past 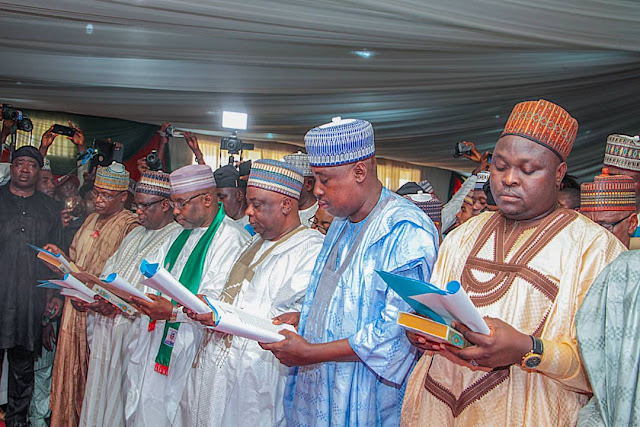 Governor Ahmadu Umaru Fintiri of Adamawa State has sworn in twenty-three commissioners who will part of the Executive Members of the State and admonished them to correct the ills of the past.
Soonest after their oath of office, which was administered by the Hon. Attorney-General & Commissioner for Justice, Barr. Afraimu Jingi at the Banquet Hall, Government House Yola, Governor Fintiri said that the sworn in commossioners emerged as a result of painstaking process that was designed to take Adamawa to a level of development which the present administration is championing.

Governor Fintiri noted that the new commissioners are joining the Government at a difficult time that the ills of the past need to be corrected.
Stressing that the past administration has left the state by the heavy debt burden liabilities of over a N125 billion naira.

The Governor charge the commissioners to bring the wealth of their experience they have for the development of the state and to promote conducive atmosphere and synergy  between the Permanent Secretaries and the Principal officers in the ministries they will assume responsibility.
Governor Fintiri assured the people of the State that his administration will do its best in providing the needful.

“On our part, Government will continue to create an enabling environment for every Public Servant to perform maximally, through establishing and strengthening of relevant institutions. Governor Fintiri stated.
“...May I remind you to stick to the letter and spirit of the oath which all of you have just subscribed to.
“You also should keep in mind, the broad outline of this Government’s Eleven Point Agenda, which is hinged on security, free Education, zero tolerance for corruption and justice for all, irrespective of tribe religion and creed”.

Eelier, the Adamawa State Peoples Democratic Chairman, Barr. Abubakar Tahir Shehu said that the swearing-in of the 23 commissioners signifies that Governor Fintiri led administration is the government of the masses because the commissioners were selected based on merit which about eighty percent of them were duly nominated from the people of their communities. He called on the commissioners to support the present administration to implement fully its policies, so as to take the dividends of democracy to the grassroot while assuring the full support of the ruling party, PDP in the State.

Barr. Shehu called on the people of the state to pray and give their maximum support to Governor Fintiri’s administration.

Speaking on behalf of the commissioners, Alh. Abdullahi Prambe thanked Governor Ahmadu Umaru Fintiri for finding them worthy among over three million people of Adamawa to serve in his government. Adding that the governor has carefully selected them from their various Local Government Areas so that to help in actualizing his administration eleven point agenda.
Alh. Prambe assured the Governor that they will cooperate, be loyal and ensure that they do not fail in the responsibility assigned to them.