PRESS RELEASE FCTA TO COLLABORATE WITH FRSC FOR EFFCTIVE AND SUSTAINABLE TRAFFIC MANAGEMENT .. 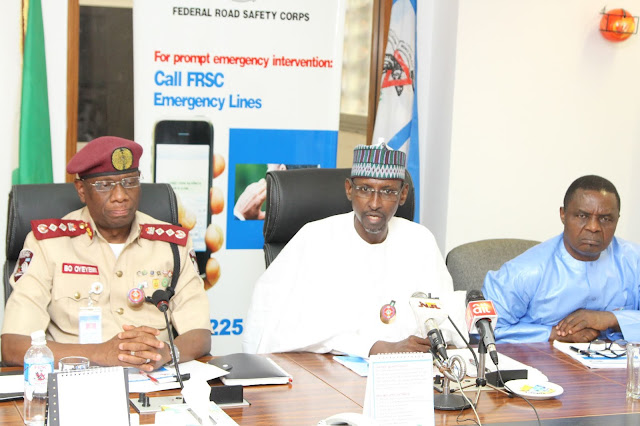 ILLEGAL CAR PARKS TO BE CLOSED

..  BAN ON MOTORCYCLE AND TRICYCLE RIDERS WITHIN THE FCC TO BE ENFORCED

The Federal Capital Territory Administration (FCTA) in conjunction with the Federal Road Safety Corps (FRSC) have worked out strategies to improve road traffic management in the Territory.
To this end, there will be an effective collaboration between both organisations, especially in the enforcement of all extant road traffic rules and regulations.

FCT Minister, Malam Muhammad Musa Bello disclosed this at an interactive session with top officials of the FRSC when he paid a courtesy visit to the FRSC headquarters in Abuja.

On the entourage of the FCT Minister were the Permanent Secretary of the FCTA, Sir Chinyeaka Ohaa, FCT Commissioner of Police, Mr. Bala Ciroma, the FCT Commandant of the National Security and Civil Defence Corps, Mr Patrick Ukpen as well as other senior staff members of the FCT Administration.

In his remarks the FCT Minister said that the FCT has grown beyond the expectations of the founding fathers hence the need for collaborations with relevant stakeholders to keep the nation’s capital effectively functional.

As part of measures  aimed at maintaining  an effective and functional traffic system and to stem the rising incidence of kidnapping, armed robbery and “one chance” operations within the city, the Minister directed that all illegal car parks be closed, adding that terms and conditions guiding their operations will henceforth be enforced for the operation of those licensed to operate.

He said “The closure is very important because, based on intelligence and based on actual arrests made, they have been avenues where a lot of criminalities are taking place including drug abuse, planning for kidnapping, sale of stolen properties and so many other things. So, they will be closed down”.

He emphasized the need to sanitize traffic operations within the FCT and to rid the entire road networks within the Phase One and parts of Phase Two of the city of traffic gridlock and the unlawful activities of tricycle and motorcycle operators.

According to the Minister, “There will be strict enforcement of the ban on the operations of tricycles and motorcycles in all the major roads within the phase 1 of the city.

“Tricycles, popularly known as Keke Napep, will no longer be allowed to operate on the entire stretch of the Ahmadu Bello Way, up to its Apo end, as well as the Shehu Shagari Expressway”.

The Minister continued “the ban on tricycles will be extended to the entire ring road and all the arterial roads into the city. This also includes parts of Asokoro, as well as Life Camp. They will now only be allowed to operate in estates and would no longer be allowed to move from one estate to the other”.

He also warned courier companies to ensure that their dispatch motorcycles that operate within the city center are on genuine assignments and only during official working hours and that riders at all times wear their helmets.

The Minister commended solutions for traffic management problems proffered by the FRSC, saying that the FCTA will extend its full support to it, inclusive of funding. He however stressed on the need for sustainability of various efforts towards road traffic management.
Malam Bello expressed delight that the proposed FRSC Radio station will soon be operational as this, he said, will go a long way in the enlightenment and advocacy campaign needed to get the support of residents for traffic programmes and policies.

Earlier in his presentation, the FRSC Corps Marshal, Dr Boboye Oyeyemi, who described the FCT as one of the international gateways to the Federal Republic of Nigeria as well as the host of foreign Missions and international personalities, said his organization was always ready to enforce traffic regulations and ensure sanity on FCT roads.

Dr Boboye further disclosed that the proposed collaboration with the FCTA will give special attention to the issues of unpainted taxis, lane indiscipline, vehicle overload as well as the operations of motorcycles and tricycles on the expressway.

Other issues he stated, include the abuse of sirens and non-usage of pedestrian bridges adding that a database of the number of taxis, motor cycles and other vehicles that are operating within the FCT would soon be developed.

Enforcement of the new traffic measures will commence  immediately.