Home » Opinion » SUPREME COURT JUDGEMENT:BETWEEN GOVERNOR FINTIRI HIS TRADUCERS AND THE TASK AHEAD TO TAKE ADAMAWA OUT OF THE DOLDRUMS

SUPREME COURT JUDGEMENT:BETWEEN GOVERNOR FINTIRI HIS TRADUCERS AND THE TASK AHEAD TO TAKE ADAMAWA OUT OF THE DOLDRUMS 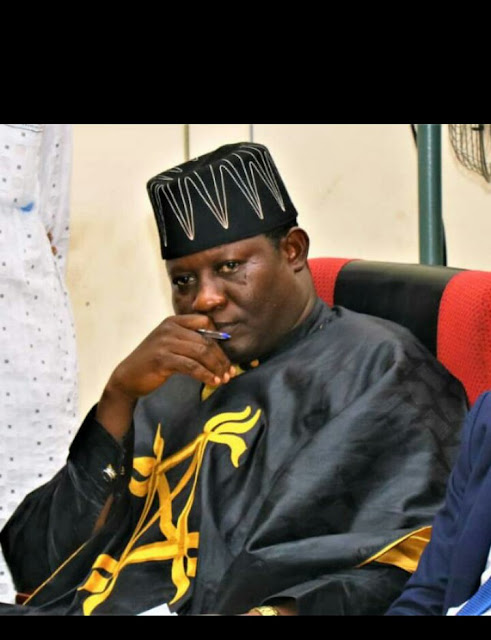 At long last the Adamawa State governorship tussle has been resolved by the Supreme court of Nigeria.
The Apex court in its ruling validified the mandate of the people of Adamawa State when they voted in Rt Hon Ahmadu Umaru Fintiri as Governor.  All said and done,  the amount of pressure and attempts to truncate the People's mandate has been proved abortive.

Governor Ahmadu Umaru Fintiri has proved himself an  indomitable overcomer that has survived several attempts to put down his political career.  He weathered the storm of being Acting Governor twice .

When it was visibly clear  that he would become Governor he was suppressed from vying for the office.  The story of Fintiri did not end there. During the Presidential campaign of Dr Goodluck Jonathan, at the mention of his name, the crowd wass ecstatic.  On later occasions when the name Fintiri is mentioned, the response of the crowd indicated how he has captured the hearts of Adamawa citizens . It therefore did not come as a surprise that having endured the vicissitudes of the political clime that did not seem to favour him that he was returned as the Governorship candidate more than four years after being sidelined from GOVERNANCE,  the " INDOMITABLE OVERCOMER " by the will of the people became Governor of Adamawa State.

But things that should have been kept to rest did not work out that way.  Technicalities and political mumbo Jumbo were put in his path.
It began with the MRDD a party relatively unknown under the mentorship of the then administration under erstwhile Governor Bindow became hell bent on distracting the normal electoral  processes that were taking place to propel him to the Governorship position. The challenge of the  ommission  of the MRDD then could be faulted on many grounds . For one, they pretended not to notice the ommission when the list of Governorship contestants was published by INEC, instead they waited until the election was declared inconclusive ( even when Fintiri was leading) before approaching the court to have the election cancelled.  Once again Fintiri was vindicated following the subsequent litigation at the state High court where the case was dismissed.
It is instructive to state that this particular case roused the ire of Adamawa electorates who visibly voiced their angst in homes , streets, markets, work places etc...it was an AGONISING MOMENT then.

Not to let matters rest, a case was file at the Governorship petitions tribunal after his leading  opponent former Governor Umaru Jibrilla Bindow congratulated him on his electoral victory.  What would have been an end to the electoral process proved yet abortive as the APC took the case to the tribunal and lost out for lacking in merit.
The APC threafter took the case to the Appellate Court whereby Ex Governor Bindow was persuaded to apply and join join in the suit seeking to oust Governor Fintiri and declare him ( Bindow ) as duly elected . The suit was again thrown out.

Things would not rest again as the APC proceeded with the case to the Apex Court ( Supreme Court of Nigeria). Beside being the supreme court at the helm of Affairs,  the normal JAW JAW that is frequent in Nigerian politics and legal manipulations , word was abroad that the powers that be would manipulate the judgement of the supreme court to deny Fintiri's mandate, but the votes of the people and their prayers could not give the " manipulators " their desired results.
It is again pertinent to note here again that the tension created in the minds of Adamawa voters while awaiting the final judgement of the supreme court was EXCRUCIATING!! This is  because while the  Adamawa APC guys were  relishing in the confidence of" grabbing back the power", the PDP guys were genuinely in prayers and living with a realization of uncertainty as to ANYTHING CAN HAPPEN.

It could be recalled that before the Adamawa ruling, the case in Imo state in a much debated fashion that continues to hover round Nigerian political discussions created furor over interpretations.

Only after 2019 General elections did Nigerians wake up to learn a new phrase called " inconclusive ". The word inconclusive to many Nigerians practically means being denied! Having agreed on anything, when you loose out the result is  inconclusive ". So it was inconclusive in Imo when arose the claim that results from  over three hundred units were " inconclusive " that made it possible for the number four position in an election to be declared winner.

This created fear in the hearts of those that voted for Fintiri  , while the hawks of the APC became confident and were even publicly boasting that the people's mandate will be snatched by a manipulated judiciary to hand over and " underserved victory"  to the people that have been rejected by popular votes and wish of the people.  This ofcourse did not happen.

The judiciary has proved that all said and done, it could stand up to its duties.
And now that the mandate of Governor Fintiri has been affirmed by the highest court of the law in Nigeria, he is saddled with the task of delivering what he promised the people and this is no easy task .

His pronouncement at the victory Rally which held  in the state capital of checking the fraudulent activities that preceded him will not endear him to the people that soiled their hands in defrauding Adamawa citizens of what rightfully belongs to them. This is one aspect our Governor must pay attention to.

The Governor should be wary of people that would appear to be friends while in reality they mean him and the people of Adamawa no good.

The travails of Governor Fintiri might not have been over, his traducers will not rest and the people of Adamawa must continue to watch carefully how attempts would be made to hinder his government from achieving what was promised the people.

What transcends in the public domain might be unknown to him but his grassroot connection that has kept him will not be forgotten. He is set to work and will deliver on promise made to the people.

For Governor Ahmadu Umaru Fintiri,  he knows that the act of governance is not easy. He has been there, at the bottom up to the top.

Governor Fintiri knows  what the  people are , how they can change behave and under what pressure they would bend.

Adamawa has suffered a lot. Her resources has been plundered over the years.  It is high time the opposition, the fence sitters and traducers alike join hands in helping the FRESH AIR Governor to take the battered state out of the DOLDRUMS!!!