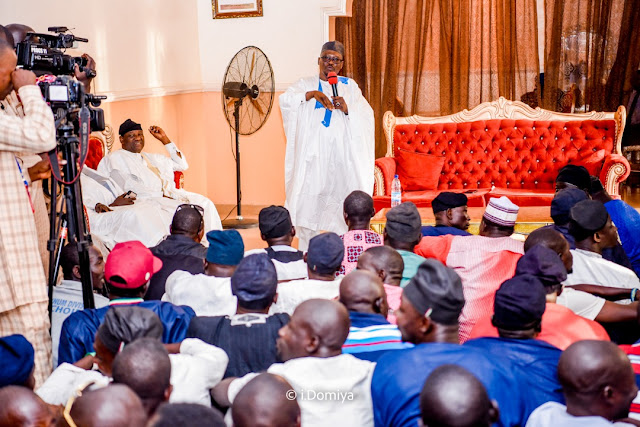 By Barnabas Augustine
8/2/2020
Following the ongoing discussion between Adamawa State Government and  the State chapter of the Nigeria Labour Congress on salary increment for civil servants on Grade Level seven to seventeen, Governor Ahmadu Umaru Fintiri assured salary increment to the affected civil servants beginning from February 2020 salary.
The Governor also assured that the process for employment of 2,000 teachers he promised last year will commence between February and March 2020.
Governor Ahmadu Umaru Fintiri reveal this at the first town hall meeting organized by his administration with the people of Numan Local Government in Numan. The meeting which was held at the instance of the Governor, has Numan Elders/stakeholders group, youth group, Religious group, Academics, Trade Union Congress and Peoples Democratic Party members.
In a separate interactive session, Governor Ahmadu Umaru Fintiri told the groups that as a civil servants’ friendly governor, his Government has implemented the payment of 32,000 naira minimum wage to civil servants from GL 6 downward, against the 30,000 agreed by Federal Government. And, assured payment of  salary increment to the civil servants that are yet to start benefiting from the salary this month.
While condemning the processes characterized with irregularities in employing civil servant by the past administration, Governor Fintiri said that the 2,000 teachers that will be employed will be base on merit to enable all qualified teachers who have no godfather gain employed. Adding that after the recruitment of qualified teachers, health sector will be the next in the employment before Ministries, Departments, Board and Parastatals.
He explained that his administration has invested over eight billion naira in the primary schools across the state and already he has approved the employment of services of consultants to asses the level of secondary schools in the state. He assured that as soon as the consultants present their report, he will immediately implement its recommendations.
Governor Fintiri reiterated his administration's commitment to recover the State fund from looters. He said that Judicial Panel of inquiry will be set up to investigate looted fund of the State while calling on the perpetrators to return the funds to avert the wrath of the law.
Responding to the issue of security challenges in the State, Governor Fintiri informed Numan Elders/stakeholders that he requested from the army to station a battalion of soldiers in Numan Federation so as to bring to an end communal crisis that engulfed the zone in the past years. He call on the community to take security issue as a collective responsibility of all and sundry.
In an interaction with the Trade Union Congress in Numan, Governor Fintiri informed them of his administration’s concern for the welfare of civil servants in Local Government Councils. Stressing that as soon as he was sworn-in, he gave the LGAs full autonomy to enable people at the grassroots breath the “Fresh Air” his administration came with.
He pointed out that one of his administration effort for the welfare of the LGA staff was payment of their April and May 2019 outstanding salaries which his administration inherited from the immediate past Government. Adding that he will ensure Local Government Council effect promotion and minimum wage increment to their staff when due.
In a discussion with the Numan Academicians, Governor Fintiri hinted that one of the challenges of his administration is inadequate fund. Stating that every month 1.2 billion naira is deducted from the State account as a result of the excessive loan collected by the past administration. While noting that is not an excuse for him to bring development to the State, the Governor said that he has put the State economy to a steady path despite the lean resource the State is generating. Stating before the end of his administration dividends of democracy will be at the door step of the masses in Numan.
He assured them his administration commitment to complete some abandoned road projects in the Local Government Area and to effect renovation on Numan General Hospital.
Governor Ahmadu Umaru Fintiri told them that his administration has come out with laudable programmes for youth and women empowerment, urging the youths to venture into the programmes as soon as they are unveiled. While assuring the youth he will not hesitate to approve any request by a Local Government in the State to employ qualified staff.
Chief P.P. Pawa who spoke on behalf of the elders/stakeholders in Numan at the town hall meeting said that the people of Numan long awaited the calibre of Governor Ahmadu Umaru Fintiri as Governor of Adamawa State while congratulating him on his recent victory at the Supreme Court.
The Chief applauded the Governor for his new security architecture that have bring peace in Numan Federation and pray for God’s wisdom over him to rule the State accordingly.
He appeal to the Governor to establish a tertiary institution in Nunan which has being a cradle for education for several years and to complete the remaining road project in Numan in which 2 out of  8 proposed were completed.
Chief Power cried to the Governor to look into the plight of his people who are suffering especially during peak of raining season due to inadequate draining system and lack of access roads in some communities in Numan.
The community also cried out on the deplorable condition of Numan General Hospital and inadequate qualified medical doctors and nurses who will take care of patients.
Other request tabled to Governor Ahmadu Umaru Fintiri by other groups include a second chance for a girl-child education, yoith and women empowerment programme, more appointments for women, promotion of Local Government staff and implementation of minimum wage at Local Government among others.