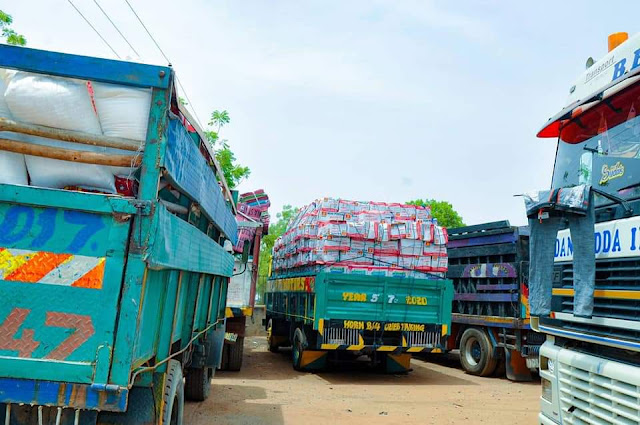 Presenting the items on behalf of the FG at the North East Development Commission Central Stores in Yola, Adamawa State capital, the Federal Minister of Humanitarian Affairs, Disaster Management and Social Development Haj. Sadia Umar Farouq said that the items were donated to ameliorate the hardship which the attack caused on Garkida community.

The Minister stated that the Federal Government through her ministry will meet with Adamawa State Emergency Management Agency, in other to assess the level of the destruction caused the affected Community and carry the needed reconstruction on social infrastructure destroyed.

The eight trucks, Haj. Farouq said will proceed to Garkida on Monday for distribution to the affected households. She explained that the trucks contain 25kg of 3,000 bags of rice, 2,500 bags of beans, 200 cantons of Maggi cubes,  1,000 cartons each of Spaghetti and Macaroni and 3,000 gallons of Vegetable oil.

While receiving the items, Adamawa State Governor, Ahmadu Umaru Fintiri thanked the Federal Government of Nigeria for its prompt provision of relief materials to the victims of Boko Haram attack on Garkida people which destroyed several buildings.

Governor Fintiri said the materials will bring succour to the people, assured that there will be judicious distribution of the materials to the affected community.

The Governor revealed that on the part of the State Government, his administration has put on necessary machinery to immediately start rebuilding the ancient town of Garkida so as to sustain normalcy and to avoid unnecessary Internally Displaced Persons camps.

On his part, the Chairman,  North East Development Commission,  Major General Paul Tarfa, Rtd. applauded Federal Government of Nigeria and Governor Ahmadu Umaru Fintiri for their quick intervention with materials that will bring succour to the people and rebuilding Garkida community plan respectively. He promise the intervention of the commission in rebuilding Garkida. 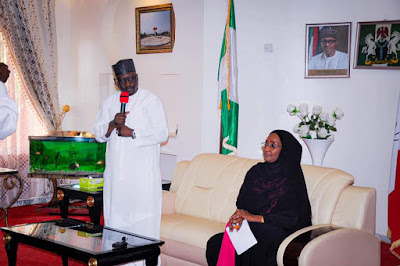 Earlier, the Federal Minister, Humanitarian Affairs, Disaster Management and Social Development Haj. Sadia Umar Farouq was at the Presidential Lodge, Government House, Yola on courtesy call on Governor Ahmadu Unaru Fintiri where she sympathize with the Governor and Garkida community over the attack of Boko Haram that raised down several buildings on 21st February. She said also that the purpose of the visit was to donate relief materials to the victims of the attack.

Responding, Governor Fintiri thanked the Federal Government in its fight against insurgency and reinforcement of Nigeria army to Garkida to restore peace.

He call on all and sundry to help in fight against insurgency, stressing that security is a collective responsibility while charging newsmen not to politicize issue of security in their reportage, rather team up with the relevant security agencies and the Government to end the menace of terrorism.